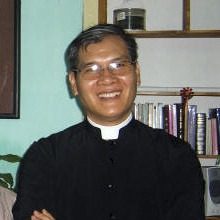 Father Ly is a Vietnamese Roman Catholic priest and activist who was imprisoned for nine years for his human rights activism.

Father Ly is one of Vietnam’s most prominent dissidents and has been a strong advocate for religious freedom and democracy for over 40 years. Freedom Now first represented Father Ly during the latter part of his 2001-2005 detention. In May 2001, an estimated 60 policeman stormed An Truyen church to arrest Father Ly after he submitted invited testimony to the U.S. Commission on International Religious Freedom. Father Ly’s testimony urged the U.S. government to reject a U.S.-Vietnam trade pact to protest ongoing human rights abuses in Vietnam.

After his arrest, the Vietnamese government denied Father Ly access to legal counsel. On October 19, 2001, the Thua Thien Hue Provincial People’s Court convicted Father Ly after a two-hour, closed trial. Father Ly received a sentence of 15 years in prison and five years under house arrest, including 13 years in prison for “damaging the Government’s unity policy.”

Freedom Now filed a petition with the UN Working Group on Arbitrary Detention on Father Ly’s behalf in September 2003. In March 2004, the Working Group found Vietnam to be in violation of international law and called for Father Ly’s immediate release.

After a sustained campaign by Freedom Now, Father Ly was released in February 2005. The campaign included resolutions from the U.S. Senate and the U.S. House of Representatives.

Father Ly returned to his advocacy work but was again detained on February 18, 2007. During his four-hour trial, Father Ly shouted out “down with communism” and a security guard immediately silenced him by clamping his hand over his mouth.

Father Ly was sentenced to eight years in prison on March 30, 2007, for allegedly committing “very serious crimes that harmed national security” by attempting to organize a boycott of an upcoming election. During his imprisonment, Father Ly suffered three strokes and was regularly denied proper medical care.

In February 2009, Freedom Now filed a petition with the UN Working Group on Arbitrary Detention on behalf of Father Ly. In September 2010, the Working Group found his detention to be in violation of international law and called for Vietnam to release him immediately.

Freedom Now mobilized international pressure to call for the release of Father Ly, including op-eds in the Washington Post, Mercury News, and The Diplomat, press releases regarding his medical condition, a report to the UN Human Rights Council prior to Vietnam’s universal periodic review, a letter to President Barack Obama, and a nomination for the Nobel Peace Prize.

Thirty-seven members of the U.S. Senate called for Father’s Ly release in July 2009. This call was renewed by 16 U.S. Senators in August 2011.

Father Ly was released on medical parole on March 15, 2010 after suffering three strokes. He was rearrested by the Vietnamese government on July 25, 2011, ending one-year and four-months of temporary medical parole.

Father Ly was granted an amnesty on May 19, 2016 and returned home where he finished serving five years house arrest in May 2021.