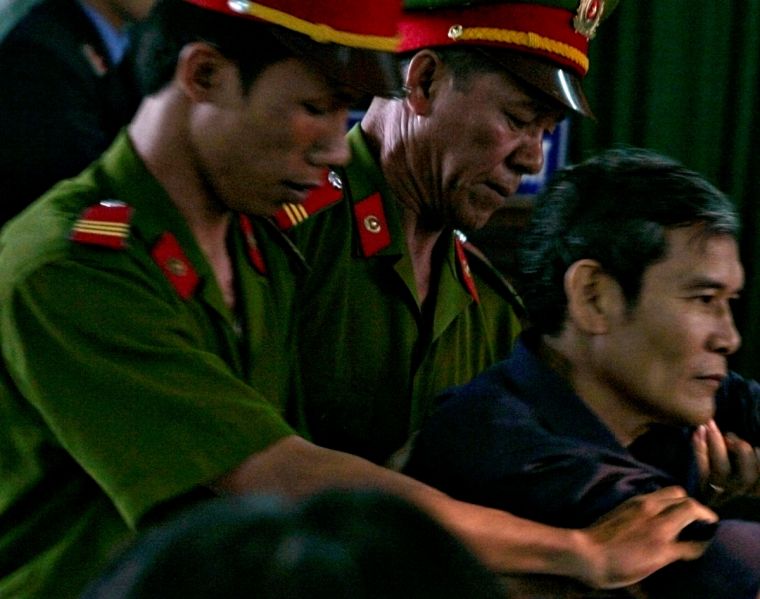 WASHINGTON – Vietnam’s jailed dissident priest Nguyen Van Ly is in deteriorating health after his second stroke this year, his international counsel said Monday, appealing to authorities to free him.

The democracy activist, who was sentenced to eight years in prison in 2007, collapsed from a stroke Saturday while kneeling to pray and is now paralyzed on the right side of his body, said Maran Turner, who represents him overseas.

Authorities took the 63-year-old Catholic priest to a hospital in Hanoi where he is surrounded by five or six guards and not allowed regular contact with his family, she told AFP.

“We are very concerned for Father Ly’s welfare and though it seems he is now receiving much needed medical attention, it is vital that Father Ly be released immediately so that he can have consistent medical attention and be with his family without restriction,” she said.
Turner, who is the executive director of Freedom Now, a Washington-based advocacy group for prisoners of conscience, said Ly’s family learned belatedly that he also suffered another stroke in July.

Ly tried to send a letter about his condition at the time but was not able to, she said.

The priest, who had already been jailed for 14 years since the 1970s, was convicted in 2007 of spreading propaganda against the communist state. He was dragged into the courtroom in handcuffs and tried to shout as a police officer quickly covered his mouth.

Prosecutors said Ly was a founding member of the banned “Bloc 8406” pro-democracy coalition, named after its founding date in 2006, and also a driving force behind the outlawed Vietnam Progression Party.

A bipartisan group of 37 US senators sent a letter to Vietnam’s President Nguyen Minh Triet in July urging the priest’s unconditional arrest.
Since then, the United States has also voiced concern about Vietnam’s jailing of bloggers and the expulsions of monks and nuns who follow revered Buddhist monk Thich Nhat Hanh from their monastery.