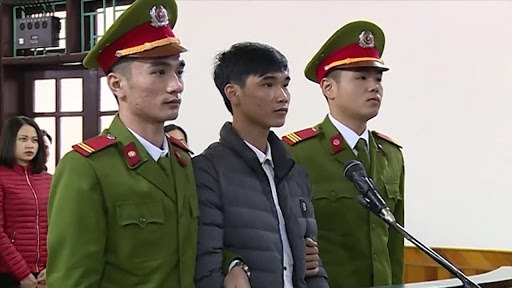 Freedom Now is proud to nominate Vietnamese journalist Nguyen Van Hoa for the 2019 UNESCO/Guillermo Cano World Press Freedom Prize. A videographer for Radio Free Asia, Nguyen has been imprisoned in Vietnam since January 2017 for his reporting on the Formosa environmental disaster.

“Nguyen Van Hoa has shown exceptional bravery in his reporting,” said Freedom Now’s Executive Director Maran Turner. “It is a privilege for us to nominate him for this distinguished award. We are deeply troubled by the Vietnamese government’s persecution of Nguyen, which is contrary to the values of UNESCO. Nguyen deserves to be praised for his work highlighting environmental threats and government failures to protect its communities. We hope UNESCO will honor this extraordinary young man.”

In April 2016, four provinces in central Vietnam (including Nguyen’s home province) experienced one of the worst environmental disasters in the history of Vietnam – an industrial toxic spill from the Formosa steel plant in Ha Tinh. Although the corporation caused the spill by flushing cyanide and other chemicals into the ocean, the event became a political issue when the government moved slowly to mitigate the spill. The spill decimated the local fishing industry and heavily impacted tourism. Protests ensued in the wake of the government’s tepid response. Formosa officially accepted responsibility for the spill in June 2016.

Prior to his arrest, Nguyen was a videographer for Radio Free Asia’s Vietnamese language service and had been covering the environmental disaster and its fallout. He advocated for the rights of people injured in the incident. He was the first person to broadcast live footage of protests outside of Formosa’s plant using a flycam drone. In October 2016, his footage of more than 10,000 peaceful protesters went viral. In November 2016, Nguyen was beaten by police and had his camera and phone confiscated while on assignment for Radio Free Asia.

Nguyen was arrested for drug possession on January 11, 2017. Nearly two weeks later, his family received notice of Nguyen’s temporary detention, but with the charges listed as “abusing democratic freedoms to infringe upon the interests of the State,” per Article 258 of the Vietnam Penal Code. For the first three months of his detention, Nguyen was not allowed to meet with his family. He finally saw his family in April 2017, shortly after a taped confession was broadcast on television.

The government did not officially announce Nguyen’s arrest until April 6, 2017. At that time, the charges against him were again changed, this time from Article 258 to Article 88 – “disseminating propaganda against the state” – a charge that carries a heavier sentence.

Nguyen’s trial commenced in November 2017 and lasted only two and a half hours. He was sentenced under Article 88 to seven years in prison followed by three years of house arrest under. The Vietnamese government claimed that the trial was open to the public, but only Nguyen’s sister was permitted to enter the courtroom. Nguyen requested the assistance of a particular lawyer, but the government denied his request and never provided him with an alternative legal counsel.

In October 2018, Nguyen was able to send a letter to his family in which he describes how he was mistreated and coerced into testifying against other activists in cases to which he had no connection.

Created by UNESCO’s Executive Board in 1997, the annual UNESCO/Guillermo Cano World Press Freedom Prize honors a person, organization or institution that has made an outstanding contribution to the defense or promotion of press freedom anywhere in the world, and especially when this contribution was achieved in the face of danger. Past recipients include Egyptian photojournalist Mahmoud Abu Zeid, Azerbaijani journalist Khadija Ismayilova, Ethiopian publisher Reeyot Alemu, and Russian human rights activist Anna Politkovskaya.

The prize is named in honor of Guillermo Cano Isaza, a Colombian journalist who was assassinated in front of the offices of his newspaper in Bogota in December 1986.