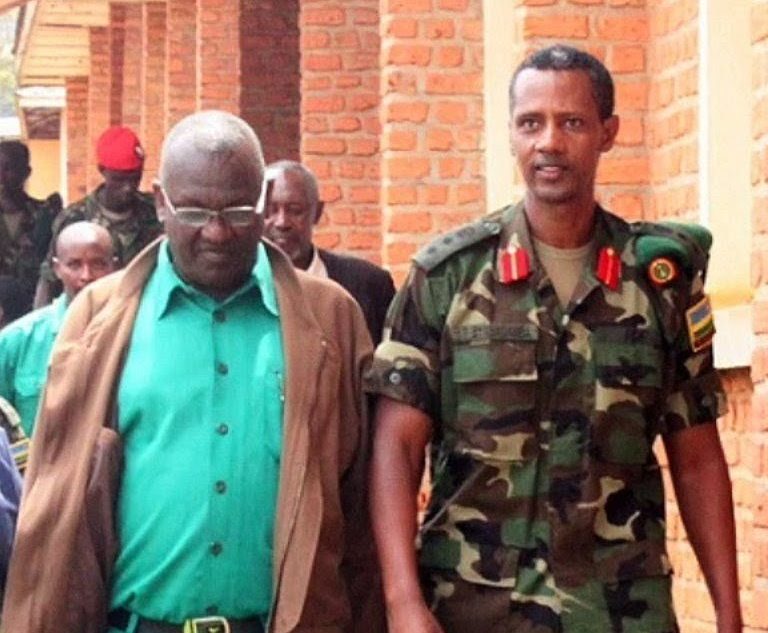 Date of Birth: 1967 and 1955
Occupation: Former military officers
Arrested: August 17, 2014
Charges: “being a leader who tarnishes the image of the country or the government” (Byabagamba and Rusagara); “inciting insurrection or trouble among the population” (Byabagamba and Rusagara); “concealing objects which were used or meant to commit an offense”(Byabagamba); “desecrating the national flag”(Byabagamba); public defamation (Rusagara); participatingin a seditious meeting (Rusagara); illegally possessing a firearm (Rusagara)
Sentence: 18 years and 15 years
Expected Release: August 2032 and August 2029

Tom Byabagamba and Frank Rusagara are former Rwandan military officers. They are currently imprisoned for 18 years and 15 years, respectively, for criticizing the Rwandan government.

Exiled to Uganda at a young age, Rusagara returned to Rwanda in 1994 when he joined the Rwandan Patriotic Front during the conflict that ended the Rwandan genocide. He remained in the military and reached the rank of brigadier general. Throughout Rusagara’s decorated career, he served as director of the Nyakinama military school, chief justice of the Kanombe Military High Court, and Defense Attaché to the United Kingdom. In 2013, Rusagara was forced to retire from the military along with 600 other officers.

Rusagara’s brother-in-law, Tom Byabagamba, is a decorated military officer who served as the personal bodyguard of President Kagame from 1990 to 2010. Between 2010 and 2013 he served as head of the Republican Guard, personally charged with leading security for the president.

François Kabayiza is a former officer. A retired sergeant, Kabayiza worked most recently as Rusagara’s driver.

After his retirement, Rusagara frequented several popular social gathering spots in Kigali. He met with other military colleagues at these venues and over meals he would occasionally make comments that were critical of the government. He also sent emails to colleagues criticizing the country’s leadership.

Rusagara, Byabagamba, and Kabayiza were tried jointly in the Kanombe Military High Court, even though Rusagara and Kabayiza were civilians. The trial itself was rife with procedural violations and irregularities. The defendants were only allowed to cross-examine four out of the eleven prosecution witnesses testifying against them. Additionally, one of the witnesses who testified on behalf of the prosecution had served as a judge in one of the defendant’s pre-trial hearings. One of the prosecution’s witnesses faced similar charges as the defendants and later disclosed that he was pressured to testify in exchange for his acquittal.

In July 2017, Freedom Now submitted a petition to the UN Working Group on Arbitrary Detention on behalf of the three men. In December 2017, the Working Group found that the detention of all three men was arbitrary and violated international law.

In August 2019, Kabayiza was released at the expiration of his prison sentence.

Six members of the UK Parliament called for the release of Byabagamba and Rusagara in November 2019.

On December 27, 2019, the Kigali Court of Appeal upheld the conviction of Byabagamba and Rusagara while reducing their sentences to 15 years each. However, Byabagamba was given an additional three year sentence in November 2020 after allegedly stealing a mobile phone as part of a plot to break out of prison.

Freedom Now has brought international attention to this case by testifying before the U.S. House of Representatives’ Tom Lantos Human Rights Commission (you can view video of this hearing below) and preparing a report for the UN Human Rights Council prior to Rwanda’s universal periodic review in 2021.