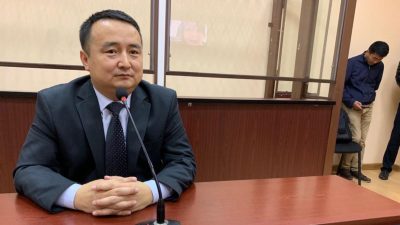 Serikzhan Bilash is a prominent Kazakh human rights activist and advocate for ethnic Kazakhs and other minorities held in detention camps in China’s Xinjiang region. He was released in August 2019 after taking a plea bargain.

Prior to his arrest, Bilash served as the founder and director of the civil society group Ata-Jurt Eriktileri (“Volunteers of the Fatherland”) in Almaty, Kazakhstan. Founded in 2017, Ata-Jurt’s mission is to advocate for the release of ethnic Kazakhs held by the Chinese government and to actively support the relatives of those detained in the camps.

Since its founding, Ata-Jurt has provided rare insight into the wide-scale human rights violations occurring in Xinjiang. Ata-Jurt has interviewed many released detainees who have provided first-hand experience of the camps in Xinjiang. Through these interviews, Ata-Jurt has compiled significant amounts of information on China’s crackdown in the region. Ata-Jurt publishes the information that it compiles on Xinjiang by holding regular press conferences and by posting video testimonies of interviewees. As a result of these efforts, Bilash and Ata-Jurt are one of the most comprehensive and reliable first-hand resources for information about China’s detention program in Xinjiang. Although Xinjiang is closed off to international journalists and organizations, Ata-Jurt has helped the rest of the world to better understand the scale of the oppression in Western China.

Bilash’s and Ata-Jurt’s advocacy work has recently drawn the attention of Kazakh authorities. On February 13, 2019, Bilash was personally fined for running an unregistered organization in connection with his work at Ata-Jurt. A court in Almaty ordered him to pay a fine in the amount 252,000 tenges (approximately $670). Up to this point, Bilash had repeatedly attempted to register Ata-Jurt with the proper authorities, but the Kazakhstan Justice Ministry refused to grant registration.

In the early morning hours of March 10, 2019, National Security officers violently forced their way into Bilash’s hotel room, injuring him the process. The officials presented no warrant and provided no justification for arresting Bilash. They put him on a flight from Almaty to the capital, Nur-Sultan, (approximately 1,300 kilometers away) and brought him to the Department of Internal Affairs.

Later that day, police raided the Ata-Jurt offices. Government agents seized computers, cameras, and hard-drives with information about individuals detained in Xinjiang. The office was later locked and sealed by law enforcement.

The government charged Bilash under Article 174(1) of the Kazakh Criminal Code for incitement to social, national, generic, racial, class or religious discord. The charges are related to comments he made at a February 8, 2019 meeting with members of the Uyghur community. During the course of the meeting, Bilash encouraged individuals to share information about the mass internment in Xinjiang with the world.

Bilash was placed under house arrest in Nur-Sultan. While he awaited trial, he was visited by government officials over 20 times. The officials attempted to coerce Bilash into making various written and video-recorded statements. At one point, police asked Bilash to stop raising the issue of ethnic Kazakhs detained in Xinjiang. The officials have also threatened Bilash and his family with physical harm. On one occasion, officers brought along a photograph of Bilash’s aunt, who currently resides in China, to make him aware that the government knows the identity of his family members.

Bilash’s trial began on July 29, 2019, but faced a two week delay as it was moved to Almaty, where the alleged crime took place. After several hours alone in the courtroom, the government coerced Bilash to sign a plea agreement. The agreement banned Bilash from leaving Almaty for three months and from conducting advocacy for seven years. Shortly after his travel ban was lifted Bilash and his family left Kazakhstan and have since re-located to the United States.

Freedom Now filed a petition with the UN Working Group on Arbitrary Detention on behalf of Bilash in July 2019. The Working Group found his detention to be a violation of international law in November 2020.