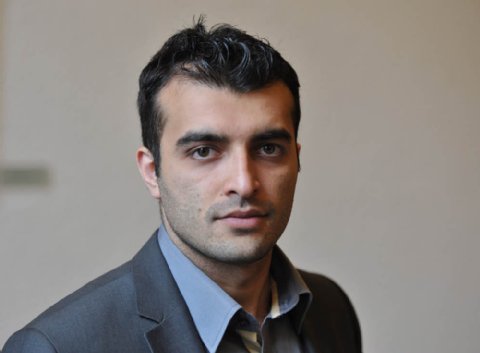 Rasul Jafarov is a human rights activist in Azerbaijan who was serving a six and one-half years sentence on charges of tax evasion, illegal business activities, and abuse of authority for his work exposing rights abuses in Azerbaijan –especially the politically motivated imprisonment of journalists, activists, and opposition leaders.

Before his arrest on August 2, 2014, Jafarov was the chairman of the Human Rights Club, an organization founded in 2010 to campaign for basic rights in Azerbaijan through traditional and innovative campaigns. Jafarov repeatedly attempted to register the Human Rights Club with the Azerbaijani government; however, repeated delays ultimately resulted in an ongoing case before the European Court of Human Rights. Jafarov’s arrest occurred as part of a broader crackdown on human rights activists who worked with registered and non-registered organizations.

As head of the Human Rights Club, Jafarov actively engaged with organs of the Council of Europe and the United Nations to highlight rights violations in Azerbaijan. Before his arrest, Jafarov worked with another detained activist, Leyla Yunus, to develop a comprehensive list of political prisoners in Azerbaijan and spoke regularly at the Parliamentary Assembly of the Council of Europe to highlight rights abuses in the country.

The Human Rights Club sought to bring international attention to human rights abuses in Azerbaijan through innovative campaigns such as “Sing for Democracy,” an initiative that coincided with the hosting of the popular 2012 Eurovision song contest in Baku. Similar projects have included the “Expression Online Initiative” and “Art for Democracy.” In leading these initiatives –which combined human rights advocacy with a strong social media strategy –Jafarov became one of Azerbaijan’s most prominent young activists.

Jafarov was charged under the Criminal Code for his leadership of the Human Rights Club and the organization’s work on critical human rights issues. Charges include tax evasion (Article 213), illegal business activities (Article 192), and abuse of authority (Article 308.2). On April 16, 2015, the court sentenced Jafarov to six and one-half years in prison.

Freedom Now brought international attention to Jafarov’s case by joining in multiple letters with NGO partners through Sport for Rights and other coalitions, joining in a letter to then-Secretary of State John Kerry, issuing a comprehensive report on the legal strategy the government used against Jafarov and his fellow activists, preparing a report to the UN Human Rights Council prior to Azerbaijan’s universal periodic review, and publishing an op-ed in the Houston Chronicle.

In July 2015, 16 U.S. Senators sent a letter to the President of Azerbaijan requesting Jafarov’s release.

On March 17, 2016, President Ilham Aliyev pardoned Jafarov. He was released from prison the next day. On April 23, 2020, Azerbaijan’s Supreme Court, in response to a judgment from the European Court of Human Rights vacated Jafarov’s conviction and ordered restitution to be paid to him.