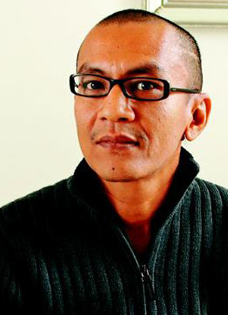 Nyi Nyi Aung (Kyaw Zaw Lwin) is a Myanmar-born American citizen and democracy activist detained by the Myanmar junta on September 3, 2009. On March 18, 2010, after a sustained campaign by Freedom Now, the junta released Aung and he returned home to Maryland and his fiancé, Wa Wa Kyaw.

Aung has been a significant force in the Myanmar pro-democracy movement since 1988 when Myanmar’s ruling military junta first detained and tortured him, then age 18, for his efforts organizing peaceful student protests. After his release, Aung was one of the leading organizers of the country-wide demonstrations against the junta that culminated in the junta’s violent crackdown against the citizens of Myanmar on August 8, 1988.

Aung was subsequently forced to flee to Thailand and, in 1993, resettled in the United States as a political refugee. He received a B.S. in computer science from Purdue University and continued to work on Myanmar pro-democracy issues as an independent, non-violent activist. Prior to his 2009 arrest, Aung delivered a petition to the United Nations with over 680,000 signatures calling for the release of all political prisoners in Myanmar. Aung’s mother and two cousins were imprisoned for their involvement in the 2007 Saffron Revolution.

On September 3, 2009, Aung flew to Myanmar to visit his imprisoned mother, who the junta denied treatment for cancer. Aung was detained immediately after exiting the aircraft. The junta failed to acknowledge to Aung’s family or the U.S. Embassy that it detained Aung until September 20, 2009. Upon receiving consular access, U.S. Embassy officials learned that Aung had been tortured. Aung later spent over one month in military dog cell confinement.

After a trial that violated both Myanmar domestic and international law, Aung was convicted on February 10, 2010, and sentenced to five years imprisonment, including hard labor, commuted to three years. Aung was found guilty on false charges of forging a national identity card, failing to declare currencies at customs, and failing to renounce his Myanmar citizenship.

Freedom Now filed a petition in February 2010 with the UN Working Group on Arbitrary Detention on behalf of Aung. The Working Group determined in September 2010 that the detention of Aung was a violation of international law and called for his immediate release. Freedom Now brought international attention to Aung’s case by publishing op-eds in The Nation and the Wall Street Journal; requesting consular access, and facilitating a letter from 53 members of the U.S. House of Representatives.

Aung was released on March 18, 2010. His homecoming was featured in an article in the Washington Post and the Washingtonian. Aung continues to be a strong advocate for democracy and human rights in Myanmar.