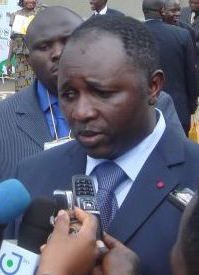 Lewis Medjo is a Cameroonian journalist twice arrested and imprisoned for his reporting on human rights abuses and corruption. He serves as managing editor of the weekly newspaper La Détente Libre.

Medjo is known for his reporting on human rights and good governance issues. Because his reporting was often critical of the Cameroonian government, he and his family were regularly harassed by government agents.

In February 2017, Medjo was arrested and sentenced to six months in prison and a $1,800 fine on the charge of defamation. Because he was unable to pay the fine, his sentence was increased to two years. The charge stemmed from a story he published in November 2012 which alleged a prominent lawyer and politician was involved in stealing cars. He was released in August 2017 after serving six months and paying the fine.

Freedom Now previously represented Medjo when he was wrongfully imprisoned on charges of “spreading false news” in 2008.

On August 7, 2008, La Détente Libre published an article titled, “Thunderbolt at the Supreme Court: Biya Fires Dipanda Mouelle.” The article speculated that Cameroonian President Paul Biya was compromising the independence of the judiciary by forcing out Supreme Court President Alexis Dipanda Mouelle. The story was based on a presidential decree that did not extend Mouelle’s term, although Mouelle subsequently remained on the Supreme Court. Medjo was arrested for his role in publishing the article.

The chief of the provincial “plain-clothes police” arrested Medjo on September 22, 2008. After a number of postponements, the court convicted Medjo on January 7, 2009, of “spreading false news” and sentenced him to three years in prison and a fine of two million CFA francs.

During Medjo’s more than two years in New Bell Prison, his health deteriorated gravely. He had several heart attacks and suffered from chronic respiratory attacks, severe dental problems, and an ear infection that left him deaf in his right ear. New Bell Prison is known for its harsh and life-threatening conditions and has been described as “hell on earth.” It was originally built to hold 800 inmates but now holds more than 2,800. The prison does not provide adequate food or medical care for prisoners. Inmates are often beaten and chained. The prison has only seven water taps for its entire population. The acute shortage of water and poor sanitation contributes to poor hygiene, illness, and death.

Freedom Now worked closely on a number of private initiatives to secure Medjo’s release with the United Nations and with members of the U.S. Congress, in particular, Senator Richard Durbin (D-IL). In May 2010, President Biya issued a presidential amnesty freeing Medjo from prison.