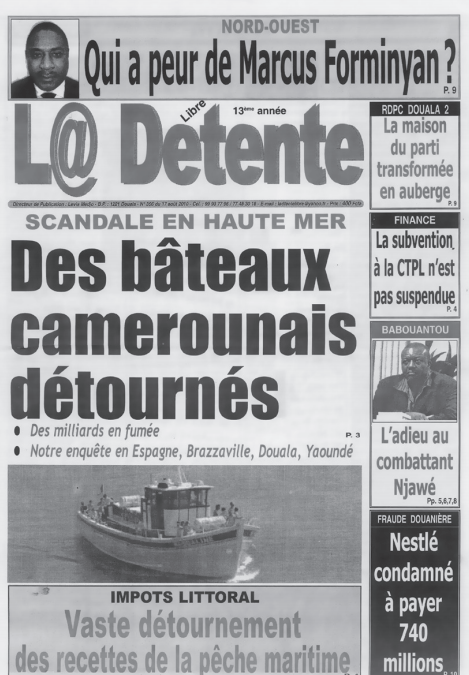 On August 17, 2010, former Freedom Now client Lewis Medjo began republishing his newspaper, La Détente Libre, just three months after being freed from Cameroon’s New Bell Prison. The publication, which the Cameroonian government shut down, was known for its regular reporting on human rights and good governance issues. Going to press for the first time since Mr. Medjo’s wrongful arrest in 2008 for allegedly disseminating false news, the paper focused on mourning the loss of Pius Njawe, a Cameroonian journalist who died in a car accident while visiting the United States in July. Pius was a dominant force in independent news and was reported to have been arrested over 100 times for his critical reporting.

In 2008, Mr. Medjo was sentenced to three years in prison and a fine of two million CFA francs after La Détente Libre published an article titled, “Thunderbolt at the Supreme Court: Biya Fires Dipanda Mouelle.” The article speculated that Cameroonian President Paul Biya was compromising the independence of the judiciary by forcing out Supreme Court President Alexis Dipanda Mouelle. The story was based on a presidential decree that did not extend Mr. Mouelle’s term, although Mr. Mouelle subsequently remained on the Supreme Court.

During Mr. Medjo’s more than two years in New Bell Prison, his health deteriorated gravely. He had several heart attacks and suffered from chronic respiratory attacks, severe dental problems, and an ear infection that left him deaf in his right ear. New Bell Prison is known for its harsh and life-threatening conditions and has been described as “hell on earth.” He is now receiving medical treatment.

Freedom Now worked closely on a number of private initiatives to secure Mr. Medjo’s release with the United Nations and with members of the U.S. Congress, in particular, Senator Richard Durbin (D-IL). In May 2010, President Biya issued a presidential amnesty freeing Mr. Medjo from prison.

We celebrate Mr. Medjo’s perseverance and the reemergence of La Détente Libre, one of few sources of independent news for the Cameroonian people.