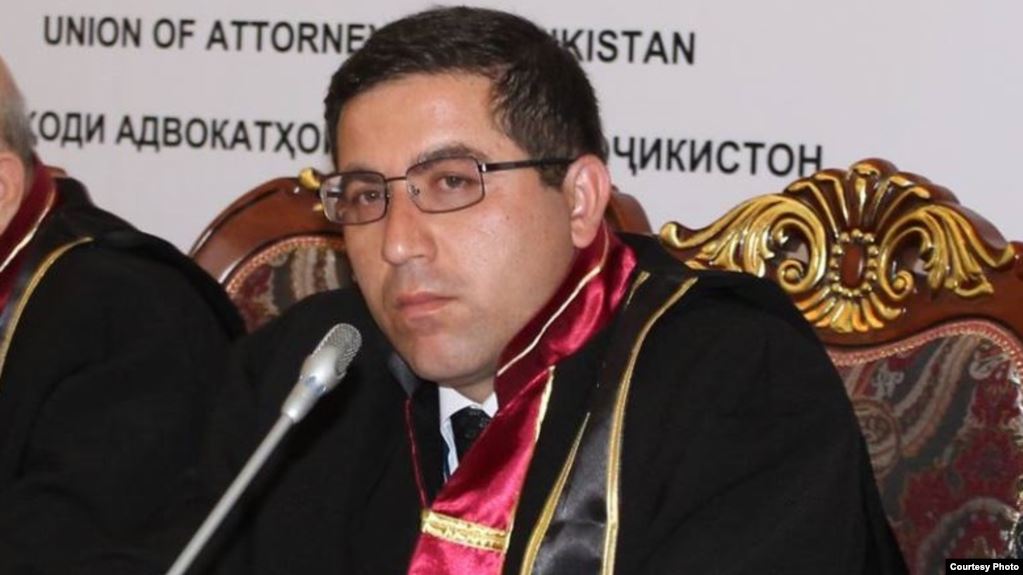 Buzurgmehr Yorov is a prominent Tajik human rights lawyer who was arrested in September 2015 and sentenced to 22 years in prison for his representation of political opposition leaders.

As a young man, Yorov worked for several years as an investigator in the Department of Internal Affairs in Dushanbe. After earning his law degree in 1997, he worked as a legal counsel for the legal aid bureau of the Shohmansur District of Dushanbe for nearly 10 years.

In 2007, Yorov founded Sipar, an independent law firm. Through Sipar, he was involved in a number of high-profile legal cases, representing individuals prosecuted by the government of Tajikistan on charges deemed politically motivated. Yorov thus earned a reputation as one of the most fearless human rights lawyers in Tajikistan, however he was routinely targeted by the government for this work. For example, one specious case, which sought to dissolve the Sipar law firm, was initiated by the former chief military prosecutor of Tajikistan and current Attorney General of Tajikistan.

In recent years, Yorov represented a number of political prisoners and members of the Islamic Renaissance Party of Tajikistan (IRPT), one of the only officially registered opposition parties in the country until 2015. In 2011, he represented Hoji Akbar Turajonzoda, a prominent religious figure and senator affiliated with the IRPT, who sued the head of the Council of Ulema, a nominally independent, but state-approved, Islamic organization, for defamation. In 2013, he represented Muhiddin Kabiri, the leader of the IRPT and a member of parliament, who had been sued by the mayor of Dushanbe for statements regarding tree cutting in the capital.

In 2014, he represented Fakhriddin Zokirov, a lawyer who had been arrested for forgery in connection with a bank loan. It was widely understood that this justification was a pretext to arrest Zokirov for representing Zayd Saidov, a businessman who had founded a new opposition political party. Besides criminal defense, Yorov also took on the civil cases of many citizens and entrepreneurs who suffered from raids and seizures of their businesses by the members of the Tajik president’s family.

Yorov has also worked closely with the opposition Social Democratic Party of Tajikistan (SDPT). In 2010 and 2015, Yorov attempted to run as a candidate from the SDPT in elections to the legislative bodies of the Rudaki region and the city of Dushanbe, however the government prevented him from registering as a candidate. In 2015, Yorov sued the Central Election Committee of Tajikistan for not registering him as a candidate; in one of the hearings, the CEC representative for the Rudaki region directly told Yorov that the parliament was not open to people like him, that this decision came from above, and that no lawsuit could change that.

In early September 2015, Yorov took on the initial representation of 13 IRPT members falsely accused by the government of orchestrating a failed coup in September 2015.

On the same day that the Tajik Supreme Court designated the IRPT a terrorist organization, police arrested Yorov, raided his home and legal office without a warrant, and ultimately charged him with forgery, fraud, “arousing national, racial, local or religious hostility” and extremism. These charges appear to have been prompted by an interview Yorov gave shortly before his arrest in which he announced that his client had been tortured in pre-trial detention and called for a coalition of lawyers to join him in representing the detained IRPT members.

Yorov was held in pre-trial detention for eight months; where he was beaten and held in solitary confinement. On October 6, 2016, after a trial replete with due process violations, he was sentenced to 23 years in prison.

Before his sentencing, Yorov read aloud an 11th century poem by a Persian poet. As a result, authorities charged him with contempt of court and insulting a government official. On March 16, 2017, he was convicted and sentenced to an additional two years.

In March 2017, the government charged Yorov with additional offenses: fraud and publicly insulting the president. On August 18, 2017, Yorov was found guilty of these charges and sentenced to 12 years of confinement in a maximum security prison. Because of the related nature of the crimes across the three trials, the combined sentence for Yorov has been set to 28 years.

Among other violations, throughout these trials, Yorov was unable to freely communicate with or receive the assistance of counsel or even present his own defense. He continues to be badly mistreated in prison and his family has received ongoing threats from the government not to advocate on his behalf.

On October 22, 2018, Freedom Now, Lawyers for Lawyers, Hogan Lovells LLP, and DLA Piper filed a petition with the UN Working Group on Arbitrary Detention on behalf of Yorov. In May 2019, the Working Group issued an opinion that determined Tajikistan violated international law and called for Yorov’s immediate release.

Freedom Now, along with partners Civil Rights Defenders, Human Rights Watch, Lawyers for Lawyers, and the Norwegian Helsinki Committee, have called on the UN Secretary-General, the European Union, and the UN Special Rapporteur on Independence of Judges and Lawyers to raise Yorov’s case.

Freedom Now detailed the case of Yorov and other Tajik political prisoners in a report to the Human Rights Committee prior to Tajikistan’s periodic review in June 2019 and in a submission to the UN Human Rights Council for Tajikistan’s Universal Periodic Review in March 2021.

Yorov was shortlisted as one of three candidates for the Council of Europe’s Václav Havel Human Rights Prize in August 2019.

Yorov was presented the Homo Homini Award by the Czech organization People in Need in February 2020.