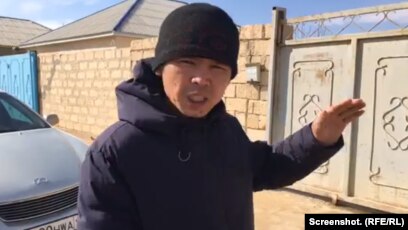 Freedom Now strongly condemns the sentencing of labor rights activist Erzhan Elshibayev on September 29 to an additional seven years in prison for allegedly disobeying prison authorities. We call on all charges against Elshibayev to be dropped and for him to be released from prison unconditionally.

The arbitrary extension of prison sentences is a common practice across Central Asia, especially in Uzbekistan and Turkmenistan. Prisoners convicted under politically-motivated charges are often the victims of these extensions as authorities use spurious charges, based on vague laws, to silence and intimidate critics of abysmal, life-threatening prison conditions.

Elshibayev was initially arrested in March 2019 and sentenced to five years in prison on charges of hooliganism. In its decision finding his detention to be arbitrary and a violation of international law, the UN Working Group on Arbitrary Detention singled out this provision of Kazakhstan’s Criminal Code as being highly vague and used arbitrarily against activists. Despite the Working Group issuing this opinion in May 2021, Kazakhstan has taken no steps to comply with the decision calling for the release of Elshibayev or reform its laws to respect its international human rights obligations.

Since his transfer to penal colony NEK-169/5 in October 2020, Elshibayev has been the target of reprisals from prison authorities. These reprisals appear related to complaints Elshibayev has filed against prison authorities for mistreatment. In early June 2021, authorities stopped providing him with newspapers he had been receiving since he was imprisoned, claiming the publications were banned. Shortly thereafter, prison guards allegedly discovered contraband in his cell, which they used as a pretext to place him in a disciplinary punishment cell for nine months.

These actions took a severe toll on Elshibayev’s mental health leading to him to attempt suicide on at least two occasions. He received only cursory medical attention after inflicting injuries on himself. In March 2022, he made a video threatening to kill himself in protest against continued reprisals from prison authorities.

Zhanaozen, a city in western Kazakhstan, is the epicenter of a thriving oil industry. However, unemployment in Zhanaozen remains high. Responding to this discontent, Elshibayev organized and lead several peaceful rallies in February and March 2019 to demand that the city provide jobs for unemployed residents, especially youth, and increase wages for workers.  During the protests Elshibayev publicly criticized then-president Nursultan Nazarbayev, accusing him of corruption and mismanagement of the state budget.

After his criticisms of Nazarbayev were posted on YouTube, local police targeted Elshibayev by investigating him for a series of baseless crimes. In March 2019, police officers arrived at Elshibayev’s home and briefly detained him, alleging that he was involved in the theft of government computers. Despite assurances from authorities that harassment would end, subsequent investigations were opened, all of which were dropped due to a lack of evidence.

On March 24, 2019, Elshibayev was summoned to the police station under the pretense of investigating the 2017 incident. However, the questioning largely pertained to his advocacy activities. While at the station, police attempted to coerce Elshibayev to refuse an interview with Radio Free Europe/Radio Liberty and to coerce him into testifying that exiled opposition leader Mukhtar Ablyazov had financed the protests he had organized. Elshibayev refused to agree to the officers’ demands and was officially arrested. Two days later, he was formally charged with “intentional infliction of grievous bodily harm from hooligan motives” and “hooliganism.”

Elshibayev’s trial began in early October 2019 and was replete with procedural violations. He was not permitted to physically attend the beginning of his trial and could only watch via a dysfunctional, online broadcasting system. Serious discrepancies arose between witness testimony obtained during the pre-trial and trial stages, including the victim claiming he had no complaint against Elshibayev. Ultimately, the judge refused to accept a self-defense claim, convicted Elshibayev on both counts, and sentenced him to five years in prison. A subsequent appeal was denied. None of the other four men involved in the altercation were charged or tried for their role in the events for which Elshibayev was convicted.

Following his conviction, Elshibayev was transferred to penal colony ICH-167/9 in Lenger. After visiting Elshibayev in prison in March 2020, his wife and a friend observed severe bruising on Elshibayev’s body from beatings received in prison. However, after photos of his bruising were shared on the internet and news of the beatings spread, prison officials forced Elshibayev to sign a statement denying that the beatings took place. In August 2020, after Elshibayev submitted an official complaint regarding his mistreatment, officials placed Elshibayev in solitary confinement for two weeks. In October 2020, Elshibayev was transferred to another prison, penal colony NEK-169/5 in the city of Kyzylorda, approximately a 31-hour car ride from his hometown.

Freedom Now filed a petition with the UN Working Group on Arbitrary Detention in November 2020 on behalf of Elshibayev. in May 2021, the Working Group issued an opinion in which it determined his detention is a violation of international law.