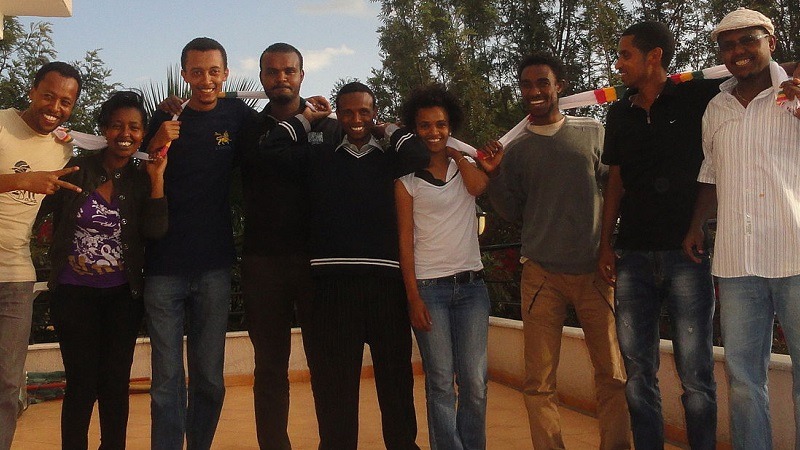 In April 2014, six bloggers associated with the online group called “Zone 9” were arrested and charged with violations of the country’s much-criticized Anti-Terror Proclamation. Detained along with the Zone 9 Bloggers were three journalists who were socially-connected to the bloggers. The activities of the Zone 9 bloggers were primarily limited to activism through social media and management of a blog where they posted articles about political repression and social injustice in Ethiopia.

Founded in May 2012, Zone 9 sought to become a forum for critical information at a time when the space for independent reporting in Ethiopia is increasingly closed-off. Although the website was frequently blocked inside the country, members used Facebook accounts to circulate articles –which were often critical of government policies. Campaigns on the website included trumpeting respect for constitutional norms, the right to free expression, and the right to freedom of assembly. However, as a result of harassment by security officials, the group stopped posting critical posts between September 2013 and April 2014.

On April 23, 2014, the Zone 9 bloggers announced that they would resume activity on the website in light of the approaching 2015 national elections. The young bloggers also promised to share information about any additional pressure put on them by government authorities.

On April 25, 2014 –just two days after the group announced that it would begin again its online activism –Ethiopian authorities began arresting the bloggers. That day, six of the bloggers were arrested: Zelalem Kibret, Atnaf Berhane, Natnail [Natnael] Feleke, Mahlet Fantahun, Befekadu [Befeqadu] Hailu, and Abel Wabella [Wabela]. Police also arrested two independent journalists socially connected to the bloggers but without any affiliation to the Zone 9 blog: Tesfalem Waldyes [Weldeyes] and Edom Kassaye. On April 26, 2014, authorities arrested a third independent journalist, Asmamaw Hailegiorgis. Since their arrests, the detainees have complained of severe mistreatment to the Ethiopian Human Rights Commission.

All nine detainees were held without being presented before a judge until later in the month of April when they appeared before the court and were accused of “working with foreign organizations that claim to be human rights activists and agreeing in getting financial and intellectual assistance to incite public violence through social media.” Although initially held under the Criminal Code, the government invoked the widely criticized Anti-Terrorism Proclamation on May 17, 2014 and formally charged the writers on July 17, 2014.

On July 8, 2015 charges were dropped against Kibret, Fantahun, Waldyes, Hailegiorgis, and Kassaye. All five were subsequently released from prison.

On October 16, 2015 terrorism charges were dropped against Berhane, Feleke, Wabella, and Hailu. The first three individuals were released from prison the next day. Hailu was kept in prison on charges relating to inciting violence, but released on bail on October 21, 2015. Charges against him were dropped in 2018.