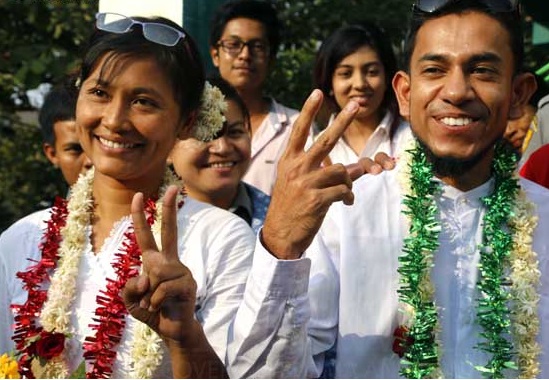 Zaw Zaw Latt and Pwint Phyu Latt are Muslim interfaith activists based in Myanmar. They were sentenced to four years of hard labor for alleged crimes related to their activism.

Zaw Zaw Latt and Pwint Phyu Latt are members of the Peace Seeker and Multiculturalist Movement, an interfaith foundation which includes members from a variety of faith backgrounds, including Buddhists, Muslims, Christians, Hindus, and Haha’i. It follows a model of interfaith activism where the primary work is to provide humanitarian relief. Zaw Zaw Latt and Pwint Phyu Latt visited the Kachin state in June 2013 as part of an interfaith peace delegation. During the visit, they staged a peace march to a town called Lisa, where the Kachin Independence Army is headquartered. At the march, the group walked to Lisa, presented two objects in order to promote interfaith awareness (a statute of a Buddha and a cross), spent some time with the residents, and then left.

In April 2014 the two activists visited the Chin State, a region in western Myanmar that borders India, to deliver humanitarian aid. Photos purportedly placed the two on a bridge on the other side of the border in India.

In 2015, the Buddhist nationalist group Ma Ba Tha began a campaign for Zaw Zaw Latt and Pwint Phyu Latt’s arrest. The group had obtained photos of Zaw Zaw Latt from his Facebook account and took issue with several of his activities, including sitting back-to-back with Buddhist monks, sitting in a monk’s chair, and sitting on the same level as the monks.Through social media, Ma Ba Tha claimed that Zaw Zaw Latt was encouraging interfaith “mating” and was working with “Buddhist monks that betray Buddhism.” The group called on authorities to prosecute him.

On July 14, 2015 Zaw Zaw Latt was arrested by plain-clothes officers without an arrest warrant. The next day, he was charged with violating the Unlawful Associations Act, the charges stemming from a photo taken of him with the KIA during the 2013 interfaith delegation to the Kachin State. On July 19, police arrested Pwint Phyu Latt. She was charged with violating the Immigration (Emergency Provisions) Act, with the charges stemming from a photo of her and six other people (Zaw Zaw Latt included) taken during the 2014 visit to the Chin State.

Their trial began on September 23, 2015. The prosecution’s evidence primarily consisted of the photographs from Zaw Zaw Latt’s Facebook page and oral testimony from multiple individuals. On February 26, 2016, they were sentenced to two years in prison with hard labor for the Immigration Act charges. An additional two years with hard labor were ordered on April 8, 2016 in relation to the Unlawful Association charges. On July 4, 2016, their appeal was denied.

During their imprisonment, Zaw Zaw Latt and Pwint Phyu Latt were kept in the Obo prison in Mandalay. Zaw Zaw Latt was held in a small cell in solitary confinement.

Zaw Zaw Latt and Pwint Phyu Latt were released from prison on May 24, 2017. They were granted amnesty with 257 other prisoners by President Htin Kyaw in advance of the Union Peace Conference.