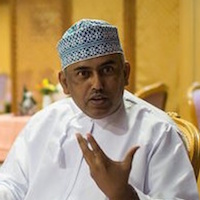 Saed Jadad is a prominent Omani human rights activist and blogger who was imprisoned for nine months as a result of an open letter detailing his criticism of the Omani government.

Prior to his imprisonment, Jadad documented human rights violations in Oman and scrutinized the government’s human rights record in both social and print media. As a result, he was officially banned from publishing in Omani newspapers. In 2011, he organized several protests in Dhofar, a southern region of the country. The protests called for government reform and urged Sultan Qaboos to expand the Omani consultative assembly.

On January 19, 2015, a summons was issued for Jadad to appear in court. The summons was related to an open letter he had written in 2013 to President Obama regarding human rights in Oman and a blog post he wrote in which he compared the 2014 protests in Hong Kong to the 2011 protests in Dhofar. Jadad disputed the legality of the summons, referring to it as an attempt to end his human rights work, and publicly declared he would boycott it. He was arrested without a warrant later that day at his home by security forces and kept incommunicado until his trial began on January 27.