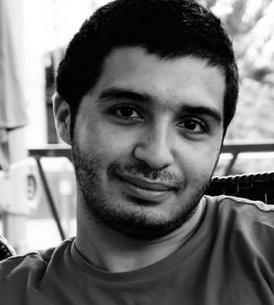 Omar Mammadov is an Azerbaijani youth activist and blogger who was sentenced to a five-year prison term on fabricated narcotics charges. The case closely fits a pattern of fabricated charges against activists in Azerbaijan in recent years –including a history of harassment, credible allegations of mistreatment, and procedural irregularities –all of which indicate that the charges were politically motivated.

Before his arrest on January 24, 2014, Mammadov was an active political and online advocate who had amassed a considerable following among young Azerbaijanis. He was a member of the opposition Civic Solidarity Party, co-founder of the educational and artistic forum “Akhyn” (Current), and a former member of the N!IDA youth group. He also administered the satirical Facebook page “Aztv-dәn Seçmәlәr” (Selections from AZTV), which was highly critical of the government and reportedly had tens of thousands of followers.

Although Mammadov was studying international relations in Cyprus at the time, his father was detained overnight in October 2013 and questioned about his son’s membership in the N!DA group. The police warned that Mammadov had insulted the Azerbaijani President online. Authorities detained his father again in December, refusing to release him until Mammadov informed them that he would return to Azerbaijan the following month.

After returning to Azerbaijan on January 20, 2014, Mammadov was taken to the Ministry of Internal Affairs and had his laptop confiscated. He cooperated and shared his online account information; however, authorities told him to suspend his satirical Facebook page.

On January 24, 2014, police arrested Mammadov on on the basis of an “anonymous tip” claiming that he possessed illegal drugs. After his arrest, Mammadov reported that police prevented him from accessing a lawyer for over 24 hours, planted heroin in his jacket pocket, and punched him several times –threatening reprisals against his family in order to obtain a confession. The government ultimately charged Omar under Article 234.4.3 of the Criminal Code (possession and sale of illegal narcotics).

As observed in the trials of other similarly targeted individuals, the proceedings appear orchestrated for the purpose of legitimizing an inevitable guilty verdict. Motions submitted by the defense team to obtain or present exculpatory evidence were rejected and unreliable, confusing, or contradictory evidence was simply accepted as evidence of guilt. As Mammadov remarked during his closing, “It is foolishness to expect justice in a Court of the country where Rule of Law is not protected.”

On July 4, 2014, the court sentenced Mammadov to five years in prison.

Freedom Now brought international attention to Mammadov’s case by joining in multiple letters with NGO partners through Sport for Rights and other coalitions and preparing a report to the UN Human Rights Council prior to Azerbaijan’s universal periodic review.

Mammadov received a presidential pardon and was released on March 17, 2016.