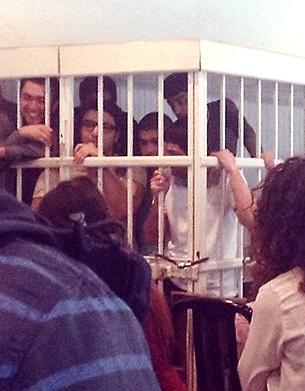 The Nida Civic Movement (commonly referred to as N!DA) is an association of young activists in Azerbaijan that was formed in early 2011 to “defend the constitutional and human rights of the society, and preserve the democratic and republican value.” In response to their peaceful activism, three of the group’s members are currently serving between seven and eight years in prison on fabricated charges, including weapons possession, narcotics possession, and organizing mass riots.

Although N!DA is not a political party, the group has attracted widespread attention and support for various initiatives, which are organized online through the group’s website and Facebook page. In particular, N!DA organized a series of demonstrations in early 2013 to protest the death of military conscripts from hazing and bullying. In January 2013, the group held a peaceful rally in downtown Baku – where there is a de-facto ban on protests of any kind. More than 60 people were arrested and five sentenced to administrative detention.

Undeterred, the young activists organized another demonstration for that spring. However, on March 7, 2013, just three days before the planned protests, the government arrested three prominent N!DA members: Mahamad Azizov (23), Bakhtiyar Guliyev (22), and  Shahin Novruzov (19). The three were accused of possessing drugs and incendiary devices under circumstances that strongly suggest that police planted evidence. Two days later, Azerbaijani news channels broadcast a confession video featuring the three young men. Mr. Azizov later reported that his statement was obtained after investigators severely beat him and threatened him with rape.

Despite these arrests, the peaceful demonstration went ahead on March 10, 2013 with over one thousand participants. Police responded with rubber bullets, teargas, water cannons, and the arrest of about 100 peaceful demonstrators. Over the next three weeks, four more N!DA activists were arrested and charged under the Criminal Code: Rashad Hassanov (31), Uzeyir Mammadli (29), Rashadat Akhundov (32), and Zaur Gurbanli (29). Messrs. Mammadli and Gurbanli were released in December 2014 under a presidential pardon.

Elsever Mursalli (22), another N!DA activist, was arrested in October 2013. He was tried in a separate proceeding on the same charges and sentenced to five years in prison. He was released on October 18, 2014 along with Messrs. Guliyev and Novruzov.