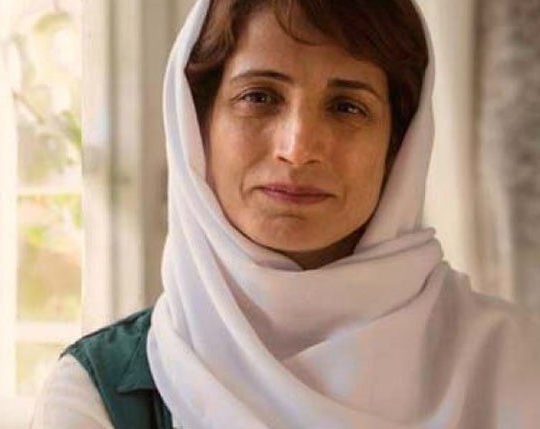 Nasrin Sotoudeh is an Iranian journalist, human rights activist, and lawyer. On September 4, 2010, authorities arrested Sotoudeh on charges including “propaganda against the state.” On September 18, 2013, she was released early from prison after serving three years in prison and returned home to her husband and two young children.

Sotoudeh holds a Master’s degree in international law from Shahid Behshti University and passed the bar examination in 1995, but was prevented from practicing law until 2003 because of opposition from the Ministry of Intelligence. During this time, she began work as a journalist and reported on women’s and children’s rights issues. As an attorney, Ms. Sotoudeh represented participants in the rights movement, including journalists, university students, and Nobel Peace Prize Laureate Dr. Shirin Ebadi.

In addition to her legal practice, Sotoudeh worked as a vocal campaigner for women’s rights. She joined the Campaign for One Million Signatures, dedicated to the abolition of laws that discriminate against Iranian women. In 2009, during the run-up to the presidential election in June, she also helped found the Coalition of Women’s Rights Movement which brought women’s demands to the attention of the candidates.

On September 4, 2010, Iranian authorities arrested Sotoudeh on charges of propaganda against the state, acting against national security, violating hijab in a filmed speech, and membership in the Center for the Defense of Human Rights. She was denied bail, access to a lawyer, and visits from her family. For her work as a lawyer and human rights defender, the Iranian government sentenced Sotoudeh to six years in prison.

On May 6, 2011, the UN Working Group on Arbitrary Detention found her detention violated Iran’s obligations under international law and called for her immediate release.

Freedom Now brought international attention to Sotoudeh’s case by publishing op-eds in The Times, the Wall Street Journal, and The Huffington Post as well as preparing a report for the UN Human Rights Council prior to Iran’s universal periodic review.

On September 18, 2013, Sotoudeh was released early from prison along with a number of other Iranian prisoners of conscience. She was not given a reason for her release; however, authorities freed Sotoudeh just days before the new Iranian president is to travel to the United States for the UN General Assembly.

Freedom Now, along with Alex Chalk from the Chambers of David Fisher QC and David Perry QC and Ms. Ebadi, served as pro bono international legal co-counsel to Sotoudeh.

Sotoudeh was arrested again in June 2018 and sentenced to 38 years in prison and 148 lashes.