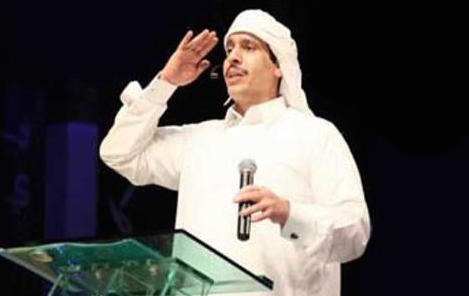 Mohammed al-Ajami is a Qatari poet who was sentenced to 15 years in prison on charges of incitement to overthrow the government and insulting the Emir of Qatar.

Al-Ajami was a third-year student of Arabic literature at Cairo University when he hosted a group of friends at his apartment on August 24, 2010. At this gathering, he recited a poem (“The Cairo Poem”) he had written that unbeknownst to him was captured on video by one of the guests. The video was posted online, where it circulated widely. In 2011, al-Ajami wrote another poem (“The Jasmine Poem”) that was also published on YouTube in which he responded to the Arab Spring uprisings and criticized Gulf nations for the treatment of their citizens.

On November 16, 2011, after he returned to Qatar from Egypt, al-Ajami was arrested by state security forces. After a lengthy pre-trial detention period was imposed, the government charged him under Article 134 of the Qatari Penal Code for challenging “by any public means the exercise by the Emir of his rights or authorities or criticizes him,” and Article 136 for instigating “by public means to overthrow the regime of the country.”

His trial and detention were rife with irregularities and violations of domestic and international law. Al-Ajami was held incommunicado for three months before his family was allowed to visit him. He was not informed of the charges against him for more than six months, a violation of Qatari domestic law. Al-Ajami was also made to sign a false statement indicating he had recited The Cairo Poem in public and in the presence of the press.

Al-Ajami’s trial was held in secret and his lawyer was banned from two court sessions as punishment for protesting the secrecy. Officials did not inform al-Ajami of the date of his final hearing; as a result, he was absent from court the day the verdict was issued. For much of his detention, al-Ajami has been held in solitary confinement in a very small cell, despite petitions to the judge about the conditions.

The Emir of Qatar pardoned al-Ajami on March 15, 2016 and he was released the same day.