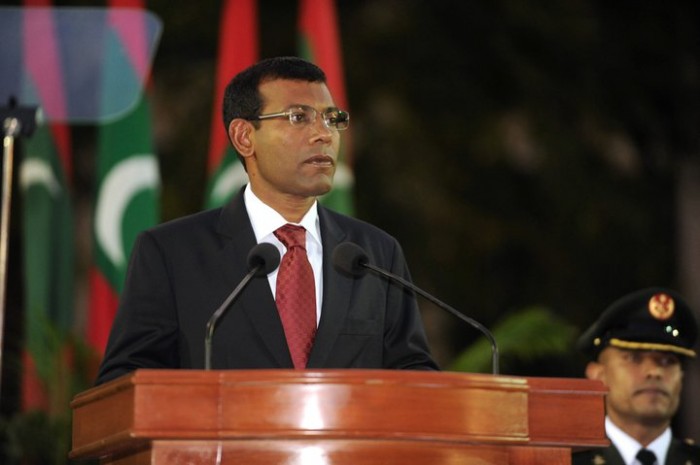 Mohamed Nasheed is an activist, journalist, and politician who served as the first democratically elected president of the Maldives. After being ousted in a coup in 2012, Nasheed continued his pro-democracy activism and was sentenced to 13 years in prison on politically-motivated terrorism charges.

Nasheed made a name for himself as a dissident journalist, regularly challenging the authoritarian regime of former president Maumoon Gayoom (1978-2008). As a result of his outspoken criticism, he was persecuted by the Government. He has twice been named a Prisoner of Conscience by Amnesty International and was the subject of a decision by the UN Working Group on Arbitrary Detention in 1995, which found that the government was arbitrarily detaining Nasheed because of his dissenting political opinion.

In 2003, Nasheed formed the opposition Maldivian Democratic Party and in 2008, on a platform of human rights and democratic principles, he was elected president in the country’s first multi-party democratic elections. Nasheed used his position as a platform for democratic reforms and climate activism. However, his presidency was cut short in 2012 by a coup when he was forced to resign at gunpoint.

Despite this, Nasheed remained active in politics. In January 2015, the government lost a key coalition partner who switched allegiance to Mr. Nasheed. With this bolstered support, Nasheed could have enough support to win the next presidential elections. To diminish this threat, the government concocted false charges of terrorism against Nasheed.

Nasheed was arrested on February 22, 2015, and within three weeks he was tried, convicted, and sentenced. Before the first hearing, Nasheed was manhandled by police while speaking to the press. Throughout the proceedings, the court displayed a complete lack of impartiality or respect for due process protections. Nasheed was completely denied the right to present a defense, and repeatedly denied access to counsel.

Through the court’s guilty verdict, the government not only discriminated against Nasheed for his political participation, but has also interfered with Nasheed’s ability to exercise his rights to freedom of opinion, expression, and association. Furthermore, days after his conviction, the Maldivian parliament adopted a new law making it illegal for anyone imprisoned to be a member of a political party.

Nasheed was kept isolated in maximum security at Maafushi Prison, where he was transferred without notice to family or counsel on April 27, 2015. Previously, the Human Rights Commission of Maldives found the facility unfit for prisoners, and his particular cell is of concern as it is located adjacent to the prison garbage dump. Visits from Nasheed’s family and counsel were severely restricted.

Along with Amal Clooney, a barrister with Doughty Street Chambers, and Ben Emmerson, a barrister with Matrix Chambers, Jared Genser of Perseus Strategies, and Maran Turner of Freedom Now represented Nasheed as his international pro bono legal counsel. In April 2015, the group filed a petition with the UN Working Group on Arbitrary Detention on Nasheed’s behalf. The Working Group determined in October 2015 that his detention was a violation of international law. The legal team also contributed to a report outlining potential sanctions against Maldivian government officials responsible for Nasheed’s detention. In January 2016, Nasheed was granted temporary medical leave to travel to the UK for medical treatment. In May 2016, the UK government granted him and his family asylum.