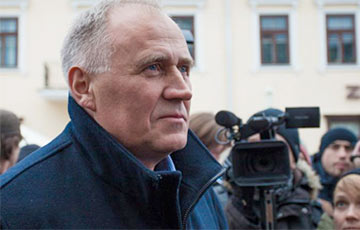 Mikalai Statkevich is a politician and former presidential candidate, who was wrongfully detained as a result of his peaceful struggle for free and fair elections in Belarus. Prior to his arrest, Statkevich played an active role in Belarus’s pro-democracy political opposition.

Stratkevich was previously detained in 2005 and sentenced to three years in prison for staging public demonstrations protesting the official results of the 2004 parliamentary elections and a referendum lifting the constitutional limit on presidential terms. He was released from prison in 2007.

In 2010, Stratkevich ran as an opposition presidential candidate. Following the elections, on December 19, 2010, Statkevich joined thousands of protesters peacefully demonstrating against election fraud in downtown Minsk. Statkevich was one of the hundreds of protesters arrested when police violently dispersed the protest. Following his arrest, he was placed in a KGB pre-trial prison and later charged under Article 293.1 of the Criminal Code for “organizing mass disorder”.

On May 26, 2011, the Leninski District Court of Minsk sentenced Statkevich to six years imprisonment in a high-security penal colony. At trial, no proof of violent attacks during the demonstration was presented.

At various times during his detention, Stratkevich’s communication with his family has been restricted and he has been threatened with new sanctions for violating prison rules. On January 12, 2012, a court sentenced Statkevich to even stricter confinement conditions, and he was subsequently transferred from penal colony No. 17 in Shklou to prison No. 4 in Mahilou for being a “malicious offender of prison rules”. In July 2012, he was also placed in a punishment cell for refusing to sign a confession. Stratkevich’s wife, Maryna Adamovich, attributes the tough measures against her husband to his refusal to apply for a pardon in protest of his innocence.

In December 2012, Statkevich was awarded the prestigious Willy Brandt Prize for his political courage. A number of organizations and governments including Amnesty International, the European Union, and the United States have called for Statkevich’s release.

In November 2013, Freedom and Hogan Lovells filed a petition with the UN Human Rights Committee on behalf of Statkevich. A decision is still pending as of February 2021.

In May 2012, 28 members of the U.S. of House Representatives sent a letter to the International Ice Hockey Federation urging it to move its 2014 World Hockey Championship from Minsk, Belarus due to its continued imprisonment of Statkevich and other opposition politicians.

Statkevich received a pardon and was released from prison on August 22, 2015.