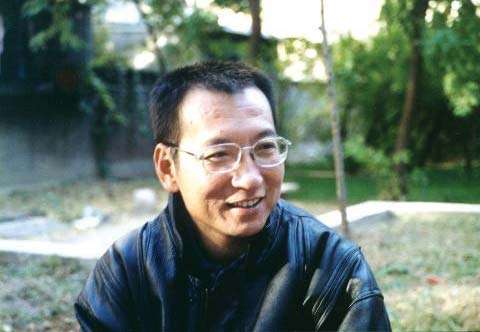 2010 Nobel Peace Prize Laureate Liu Xiaobo was a Chinese scholar and renowned dissident sentenced to 11 years in prison for “inciting subversion of state power” on December 25, 2009, for his role in drafting Charter 08. Dr. Liu was widely considered China’s most prominent dissident. He was selected to receive the 2010 Nobel Peace Prize for his “long and non-violent struggle for fundamental human rights in China.”

The Chinese government previously detained Dr. Liu for his peaceful democracy advocacy on three occasions, including his participation in the 1989 Tiananmen Square protests. Dr. Liu was one of four intellectuals who negotiated with the army for the safe passage of students out of the Square.

In 2008, Dr. Liu was one of the primary drafters of Charter 08, a political manifesto modeled on the Czechoslovakian Charter ’77. Charter 08 calls for increased rule of law, greater respect for human rights, and the end to one-party rule in China. Although mention of the online petition is not allowed within China’s great Internet firewall, to date, Charter 08 has been signed by almost 10,000 Chinese citizens and is considered influential in beginning to unite the Chinese dissident movement.

The Chinese government detained Dr. Liu on December 8, 2008—two days before the official release of Charter 08 on the 60th Anniversary of the adoption of the Universal Declaration of Human Rights. The government held Dr. Liu in solitary confinement and denied him access to his lawyers.

Dr. Liu was not formally arrested until June 23, 2009, when the State News Agency, Xinhua, quoted police as saying in a statement that ”Liu has been engaged in agitation activities, such as spreading of rumors and defaming of the government, aimed at subversion of the state and overthrowing the socialism system in recent years.”

On December 23, 2009, Dr. Liu was tried for “inciting subversion to state power” under Article 105 of the Chinese Criminal Procedure Code. His trial violated international standards for due process of law. His wife, Liu Xia, and foreign diplomats and journalists were not allowed to attend the trial. On December 25, 2009, he was sentenced to 11 years in prison and two years deprivation of political rights. In the verdict, his signing of Charter 08 was named as part of the evidence against him.

After the Nobel Committee announced that Dr. Liu was the recipient of the 2010 Nobel Peace Prize, Dr. Liu’s wife, Liu Xia, was placed under de facto house arrest. Liu Xia was escorted to Jinzhou prison to inform Dr. Liu that he won the Nobel Peace Prize and subsequently escorted back to her Beijing apartment, where she was detained with restricted communication with the outside world until 2018. Freedom Now filed a petition in August 2017 with the UN Working Group on Enforced and Involuntary Disappearances on her behalf. Freedom Now also called for China to allow Dr. Liu and his wife to attend the ceremony.

Freedom Now filed a petition in November 2010 with the UN Working Group on Arbitrary Detention on behalf of Dr. Liu and Liu Xia. The Working Group determined in August 2011 that Dr. Liu’s imprisonment violated international law and called for his immediate release.

Freedom Now mobilized international pressure for Dr. Liu’s freedom by publishing op-eds in the Washington Post (2) (3) (4), The Ottawa Citizen, the Wall Street Journal (Asia), the Observer, the Times of London, Voice of America, the Korea Times, Huffington Post, the Wall Street Journal (2), the LA Times, the Australian, and U.S. News and World Report; providing expert testimony before the Congressional Executive Committee on China; organizing a petition signed by 450,000 individuals from 130 countries; joining letters to President Obama; preparing a report to the UN Human Rights Council prior to China’s universal periodic review; and sending a report to the UN Committee Against Torture.

Heads of state, prominent intellectuals, and Nobel Peace Prize Laureates have called for Dr. Liu’s release. Fifteen Nobel Laureates issued a letter prior to the 2010 G-20 Summit. A second letter from 134 Nobel Laureates was issued in December 2012. A third letter was sent in October 2015.

Members of the U.S. Congress, the UK House of Lords, and the Canadian Parliament called for Dr. Liu’s release prior to the 2010 G-20 Summit. The U.S. Congress and Canadian Parliament both passed resolutions congratulating Dr. Liu on receiving the Nobel Peace Prize. Members of the U.S. Congress renewed the call for Dr. Liu’s release in January 2011. In May 2017, a resolution was introduced in the U.S. Senate to rename the plaza in front of the Chinese embassy in Washington, D.C. as “Liu Xiaobo Plaza.”

Dr. Liu was diagnosed with terminal liver cancer in May 2017. Over 150 Nobel Laureates issued a letter calling for his release. He was released on medical parole the following month to undergo treatment. He passed away on July 13, 2017.

In July 2018, Liu Xia was released from house arrest. She was allowed to depart China and travel to Germany for medical treatment. She remains there today.