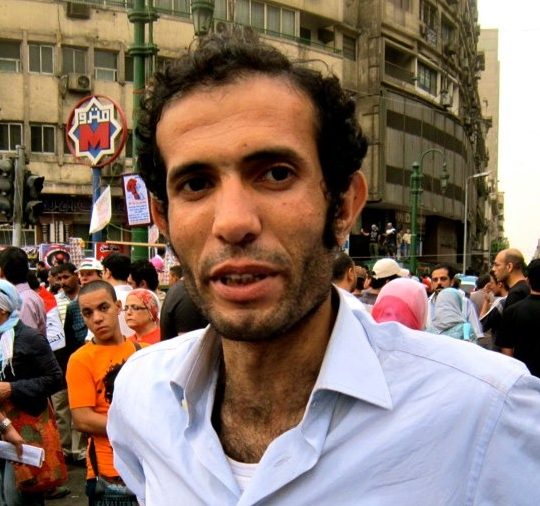 Haitham Mohamedain  is a labor activist and human rights lawyer who has been in pre-trial detention since May 2019.

On May 18, 2018, unidentified National Security officials raided Mohamedain’s house in al-Saff district of Giza governorate. These officials arrested Mohamedain without warrant or cause and then moved him to an undisclosed location. The following day, Mohamedain appeared before the Supreme State Security Prosecution (SSSP), which accused him of aiding a terrorist organization to achieve its goals, inciting the Maadi metro protests, spreading false news and statements, and misusing social media platforms. The SSSP placed Mohamedain in pretrial detention, but on October 8, 2018, Judge Moataz Khafagy ordered Mohamedain’s release on probation until his trial.

On May 16, 2019, Mohamedain again appeared before the SSSP as a defendant in Case No. 741/2019. The SSSP accused Mohamedain of collaborating with a terrorist organization with the intention of organizing anti-government protests during the Africa Cup of Nations, which Egypt hosted in 2019. Although the prosecution presented no evidence to substantiate this charge, the SSSP placed Mohamedain in pretrial detention, initially for fifteen days. Since then, the SSSP extended Mohamedain’s pretrial detention numerous times, while transferring him first to Giza Central Prison and then, in September 2019, to al-Qanater Men’s Prison.

Egyptian officials have not presented any evidence against Mohamedain, nor allowed his case to go to trial. They have held him in pretrial detention from May 16, 2019 to present, even though Egypt’s Criminal Procedure Code allows a maximum of two years time for pretrial detention. Further, Egyptian security officials have ignored a court order to release Mohamedain on probation, which the Cairo Criminal Court issued on March 8, 2021.