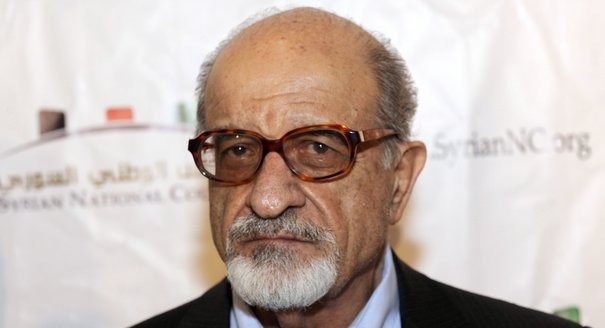 Haitham Al-Maleh is a human rights lawyer and activist, who was wrongly imprisoned in Syria for “spreading false news that could weaken the national morale.” He previously served as a judge in Syria for ten years and as the head of the Human Rights Association of Syria.

Al-Maleh has dedicated his life to advancing democratic and constitutional principles, fighting for the independence of the Syrian judiciary. These efforts garnered him the Best Human Rights Activist of the Year Award in 2002 from the Arab Program for Human Rights Activists in Cairo, and the Guezen Medal presented by the Netherlands in 2006. Despite international recognition, however, Al-Maleh’s work has been personally costly, leading to his arrest several times since 1951 for such charges as “having insulted the president.”

On October 12, 2009, Al-Maleh appeared on the Barada Television Channel to speak out against several government abuses, in particular, its arrest of his client, Muhannad Al-Hassani, the recent crack-down on pro-democracy groups like the Damascus Declaration, its unjustified perpetual declaration of martial law, its suspension of the Syrian Constitution. He objected to the Syrian government’s ongoing declaration of a “state of emergency,” which has continued since 1963 and enables the government to use unfair prosecution and imprisonment procedures for decades. Such long-term “states of emergency” are contrary to international law. Two days after his television appearance, Syrian authorities took Al-Maleh into custody.

Freedom Now and Hogan Lovells LLP filed a petition with the UN Working Group on Arbitrary Detention on behalf of Al-Maleh. The Working Group determined in February 2011 that his detention was a violation of international law and called for his immediate release.

Al-Maleh was released from prison in March 2011 as part of an amnesty.