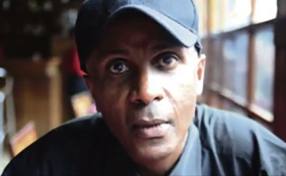 Eskinder Nega is a prominent Ethiopian journalist who was convicted and sentenced to 18 years in prison on treason and terrorism charges. Prior to his detention, Nega was a widely published independent journalist and a well-known critic of Prime Minister Meles Zenawi’s government; as a result of his writings, the Ethiopian government detained Nega at least eight times since 1993. Nega is married and the father of one son.

Nega began his work as an independent journalist in 1993 when he founded the Ethiopis newspaper. While Ethiopia and many of the other publications where Nega later worked were banned, he continued to write articles criticizing the Ethiopian regime’s abuses of power.

As a result of his critical reporting, the government detained Nega on eight different occasions. In 2005, authorities arrested Nega and his then-pregnant wife, Serkalem Fasil, who is herself an independent publisher, during a nationwide crackdown following the country’s disputed elections. Nega was charged with treason and genocide and detained for 17 months before Ethiopia’s High Court released him after a series of negotiations. After releasing Nega in 2007, the government blocked him from publishing in the country. However, Nega continued to contribute to online media outlets abroad.

Prior to his most recent detention, Nega published an online column criticizing the prosecution of journalists and dissidents under Ethiopia’s overly-broad 2009 Anti-Terrorism Proclamation and calling for an end to politically motivated prosecutions. In the months prior to his arrest, he had also written extensively about how an Arab Spring-like democracy movement might occur in Ethiopia.

On September 14, 2011, authorities arrested Nega and eventually charged him under the country’s Anti-Terrorism Proclamation and accused him of membership in the banned Ginbot 7 political party. Nega’s arrest and trial have been condemned by reputable human rights organizations as politically motivated. The prosecution’s evidence against Nega at his trial included a series of nearly inaudible recordings, short video clips presented out of context, and some of Nega’s publications and interviews. In response, Nega admitted to writing the articles in question, but rejected any involvement in Ginbot 7 and reiterated that his writings only call for peaceful democratic reform in Ethiopia.

Nega was convicted on terrorism charges on June 27, 2012, and the court sentenced him to 18 years in prison on July 13, 2012. After postponing his appeal numerous times, the Ethiopian Federal Supreme Court upheld Nega’s conviction and sentencing on May 2, 2013. One of the charges against him, “serving as a leader of a terrorist group” was dropped but had no effect on sentencing.

Freedom Now filed a petition in July 2012 with the UN Working Group on Arbitrary Detention on behalf of Nega. In April 2013, the Working Group found Nega’s detention to be in violation of international law and called for his immediate release.

Freedom Now and Media Legal Defence Initiative filed a petition in September 2013 with the African Commission on Human and Peoples’ Rights.

Freedom Now brought international attention to Nega’s case by participating in public letters with partner NGOs; publishing op-eds in Al Jazeera, the Wall Street Journal, and AfricLaw; preparing a report to the UN Human Rights Council prior to Ethiopia’s universal periodic review; and submitting a letter to the UN Special Rapporteur on Freedom of Expression.

In 2012, 16 Members of the European Parliament called for Nega’s release.

In May 2012, PEN awarded him its 2012 Freedom to Write Award for his role as an advocate for freedom of the press and freedom of expression in Ethiopia.

Nega received a pardon on February 8, 2018, and was released on February 14. He continues to work for a free and independent press in Ethiopia.