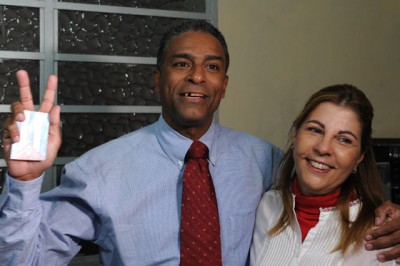 Dr. Oscar Elias Biscet is a doctor and noted advocate for human rights and democratic freedom in Cuba. He was serving a 25-year prison sentence for allegedly committing crimes against the sovereignty and integrity of the Cuban territory. The Cuban Government released Dr. Biscet on March 11, 2011.

Dr. Biscet founded the Lawton Foundation for Human Rights and is a leader of Friends of Human Rights, a grassroots organization through which small groups of civilians discuss human rights.

Dr. Biscet was arrested on December 6, 2002, in Havana on the way to a colleague’s home to attend a meeting of the Friends of Human Rights. When police tried to arrest Dr. Biscet, he and 16 colleagues sat on the ground and chanted, “long live human rights” and “freedom for political prisoners.” Everyone in the group was beaten and arrested. Dr. Biscet’s arrest came only six weeks after his release from a prior illegal prison term, also resulting from his support for human rights in Cuba.

During his most recent term of imprisonment, the Government of Cuba subjected Dr. Biscet to inhumane treatment, including confining him to a punishment cell barely larger than his own body for seven months and refusing to feed him for three weeks. During his imprisonment, Dr. Biscet lost 40 pounds and nearly all of his teeth. He suffers from hypertension, gastric ulcers, chronic gastritis, and hypercholesterolemia.

Since engaging in his case in 2005, Freedom Now conducted extensive global outreach to raise international awareness of Dr. Biscet’s case. This included initiating an urgent appeal from several UN special procedures, facilitating the publishing of op-eds, nominating him for the Nobel Peace Prize, highlighting his role as a recipient of the Presidential Medal of Freedom, and preparing a report for the UN Human Rights Council prior to Cuba’s universal periodic review.

Dr. Biscet’s release — on March 11, 2011 — follows the July 2010 announcement by the Cuban Catholic Church that a number of unjustly-imprisoned Cuban political prisoners would be freed.

Dr. Biscet continues to be a lively voice for freedom in Cuba. He has thanked Freedom Now for their participation in securing his release.