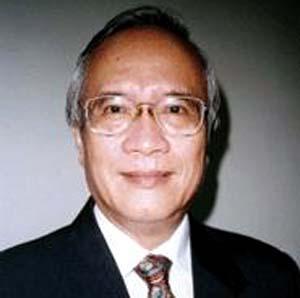 Dr. Nguyen Dan Que is one of Vietnam’s most renowned democracy activists. He was arrested on March 17, 2003, and convicted of “abusing democratic rights to jeopardize the interests of the state.” Dr. Que was freed on February 1, 2005.

Dr. Que’s history of democracy advocacy goes back many decades. He was first detained in 1978 after criticizing Vietnam’s political system. After he was released, Dr. Que founded the High Tide Humanist movement, a non-violent struggle to ensure human rights for all Vietnamese people. He urged the Vietnamese government to reduce the size of its military and instead invest in the welfare of its people. Dr. Que was detained again in June 1990 and never received a trial. He was released from prison in September 1998, but remained under virtual house arrest, under constant government surveillance and with restrictions on his movements and on any use of communication.

Dr. Que is the recipient of numerous awards for his lifelong commitment to human rights including the Raoul Wallenberg Award, the RFK Human Rights Award, and the Hellman-Hammett Grant from Human Rights Watch.

Dr. Que was arrested on March 17, 2003, four days after sending a statement to his brother, Dr. Quan Nguyen, from an Internet cafe. The statement criticized the Vietnamese government’s claim to guarantee freedom of information, highlighting the lack of independent media in the country. It also endorsed proposed U.S. legislation that would fund ways to overcome broadcast and Internet jamming by the Vietnamese government.

On July 29, 2004, the Government of Vietnam—in a closed trial and without providing him with access to counsel—sentenced Dr. Que to 30 months in prison for “abusing democratic rights to jeopardize the interests of the state.”

Freedom Now filed a petition in June 2004 to the UN Working Group on Arbitrary Detention on behalf of Dr. Que. The Working Group determined in September 2004 that his detention violated international law and called for his immediate release.

Freedom Now brought international attention to Dr. Que’s case by facilitating letters from 42 members of the U.S. House of Representatives and 12 U.S. Senators and participating with NGO partners in a letter to UN Secretary-General Kofi Annan.

On January 31, 2005, the Government of Vietnam announced that it would release Dr. Que from prison. He was released on February 1, 2005.