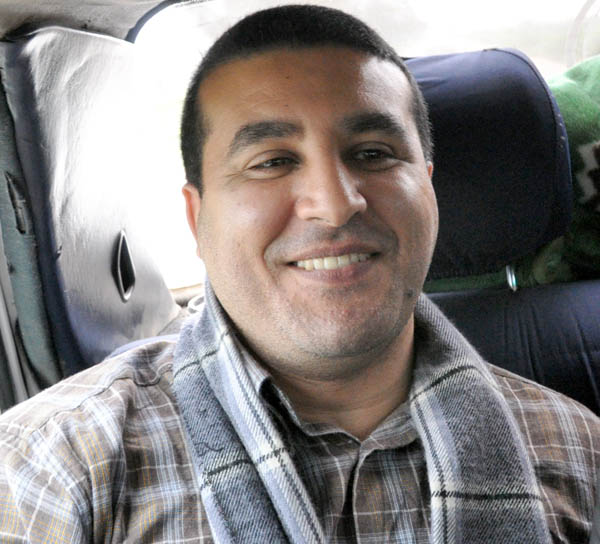 Chakib Alkhayari (a.k.a. El-Khiari)is a Moroccan journalist and human rights activist who was wrongfully imprisoned in Morocco on February 17, 2009. After a royal pardon, he was released on April 14, 2011.

Alkhayari is the founder and president of the Rif Association for Human Rights (“l’Association du Rif des droits de l’homme” or “ARDH”), an organization that campaigns for better treatment of migrants from sub-Saharan Africa in Morocco and better policing of the drug trade in Morocco’s northern coastal Rif region, among other issues. Alkhayari is also a member of the International Federal Council of the World Amazigh Congress and an outspoken advocate of the rights of the indigenous Amazigh (Berber) community in the region. Prior to his arrest, Alkhayari publicly denounced corruption relating to drug trafficking in Morocco, making numerous statements accusing Moroccan authorities of complicity in the drug trade and laxness in combating it. In addition, he spoke out against the mistreatment and abuses of migrants by Moroccan and Spanish security forces at the border between Spain and Morocco.

Alkhayari was arrested on February 17, 2009, when he reported to the judicial police in Casablanca in response to a summons. The next day, he was escorted home by ten plainclothes policemen, who—despite lacking a warrant—proceeded to raid his home. They confiscated several of Alkhayari’s personal belongings, including his computer and numerous documents relating to his work with the ARDH.

On February 21, 2009, Mr. Alkhayari was charged with “gravely offending state institutions,” in violation of Articles 263 and 265 of the Moroccan Penal Code. His trial took place on April 23, 2009, more than two months after his arrest. Just moments before the trial began, the government informed Alkhayari of two additional charges against him related to 225 Euros he had received from the Spanish newspaper El Pais for an article he wrote in July 2006. Because Alkhayari’s defense team had been denied access to his police file prior to the trial, they had not anticipated these charges and were left unable to prepare a defense by, for example, calling witnesses cited in the police file. Moreover, the judge refused to consider important evidence raised by Alkhayari’s attorneys, including evidence demonstrating that he had not criticized state institutions themselves but rather pointed out law enforcement officials who did not enforce drug control laws and that his statements concerning such public officials were true.

Despite these procedural deficiencies, on June 24, 2009, Alkhayari was found guilty of all charges and sentenced to three years in prison and a fine of 753,000 dirhams (approximately $90,000 USD). The Court of Appeals affirmed his sentence on November 24, 2009. Alkhayari and his family decided not to lodge an appeal with Morocco’s highest court because they have lost faith in the independence of the judiciary.

Following his conviction, Alkhayari was detained near his family in Taza prison. On October 14, 2010, however, after the Moroccan Association of Human Rights organized a sit-in outside the prison demanding his immediate release, Alkhayari was transferred to Toulal prison in Meknes, nearly 420 km from his home in Nador. At that distance, his aging parents were no longer able to visit him.

Many organizations called for Alkhayari’s immediate and unconditional release from prison, including Human Rights Watch and Amnesty International. On January 12, 2010, and December 10, 2010, the World Amazigh Congress appealed to the King of Morocco, His Majesty Mohamed VI, to release Alkhayari.