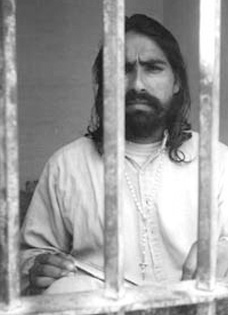 Ayub Masih was arrested in 1996 for allegedly violating Pakistan’s blasphemy laws. On August 15, 2002, after a sustained campaign by Freedom Now, the Supreme Court of Pakistan reversed Masih’s conviction, acquitted him of all charges, and released him from death row.

Masih, a Pakistani Christian then age 26, was arrested after allegedly telling a Muslim neighbor to read Salman Rushdie’s The Satanic Verses and that Christianity was “correct.” Masih denied making the statements that formed the basis for his conviction. Following Masih’s arrest, the neighbor was allocated Masih’s land and the entire Christian population of the village was evacuated. The complainant later shot and injured Masih in the trial court, but was never prosecuted by Pakistani authorities and continued as the main witness against Masih.

During Masih’s trial, religious extremists threatened to kill Masih, his attorneys, and the judge if Masih was not convicted. A Pakistani trial court judge had recently been murdered after acquitting two men of blasphemy. Masih received a death sentence by hanging.

Masih was incarcerated in Multan, Pakistan, and suffered attacks from other prisoners, denial of medical care for severe skin allergies and hemorrhoids, and solitary confinement in an 8 x 8 x 8-foot cell where the temperature often exceeded 120 degrees Fahrenheit.

After growing pressure on the Pakistani government facilitated by Freedom Now’s efforts, including a letter from key members of the U.S. Senate Appropriations Committee, the government accelerated the date of Masih’s hearing before the Supreme Court of Pakistan. On August 15, 2002, a three-judge panel of the Supreme Court heard arguments regarding Masih’s final appeal. The three judges rendered an oral decision acquitting Masih of blasphemy charges and ordering his immediate release. The Supreme Court held that the arrest, conviction, and sentencing of Masih violated due process of law, echoing the reasoning of the UN Working Group on Arbitrary Detention opinion secured by Freedom Now. This decision set a precedent for other individuals charged with blasphemy.

Freedom Now worked closely with the U.S. State Department and other groups to arrange Masih’s quick exit from Pakistan. He arrived in the United States on September 4, 2002, and successfully claimed political asylum.