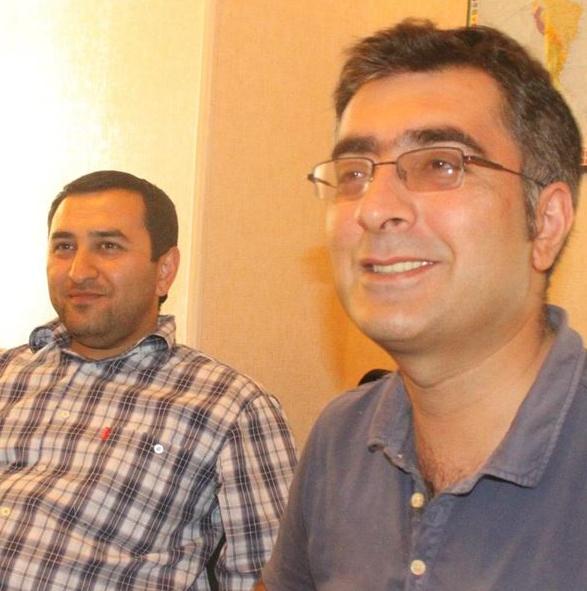 Anar Mammadli and Bashir Sulemanli are civil society leaders who were sentenced to five and one-half years and three and one-half years in prison, respectively, on charges of tax evasion, illegal business activities, and abuse of office. Prior to their imprisonment, both men led the Election Monitoring and Democracy Studies Center (EMDS), a respected non-governmental organization in Azerbaijan that worked to protect democratic rights in the country through a variety of initiatives, including election monitoring. EMDS had been prevented by the Azerbaijan government from officially registering as an NGO.

Mammadli is the chairman of EMDS and Sulemanli is the director. EMDS partnered with a registered Azerbaijani NGO to monitor the October 2013 presidential election. The two observers issued an extensive report after the election alleging widespread electoral irregularities. After the report was released, authorities repeatedly questioned members of EMDS and searched their offices, seizing press releases, reports, financial documents, and computers.

On December 16, 2013, authorities again interrogated Mammadli and Sulemanli and thereafter charged both men with violating a number of Criminal Code provisions, including Articles 192.2.2 (illegal business activity), 213.2 (tax evasion), and 308.2 (abusing official powers). Although the Nisimi district court of Baku ordered that Mammadli be held in pretrial detention, Sulemanli was released pending trial. Before trial, authorities also added charges under Articles 179.3.2 (misappropriation of funds) and 313 (forgery).

During the trial, the government claimed that the grant-funded work of EMDS failed to comply with Azerbaijan’s increasingly restrictive administrative laws on non-governmental organizations. Because the government had revoked the registration of its predecessor organization and thereafter refused to register EMDS, the group partnered with the officially registered Volunteers of International Cooperation to implement the organization’s work –and thereafter registered grants and paid taxes as required. Despite this, and the fact that a primary international donor sent a letter indicating that no funds had been misappropriated, the court found both men guilty.

On May 26, 2014, after repeated delays, the government convicted Mammadli. Similar charges have now been used to target an increasing number of civil society activists and human rights defenders in Azerbaijan.

On September 29, 2014, the Parliamentary Assembly of the Council of Europe awarded Mammadli its second annual Václav Havel Human Rights Prize.

Freedom Now brought international attention to Mammadli and Sulemanli’s case by preparing a third-party intervention with the European Court for Human Rights, joining in multiple letters with NGO partners through Sport for Rights and other coalitions, joining in a letter to then-Secretary of State John Kerry, issuing a comprehensive report on the legal strategy the government used against the two civil society leaders and their fellow activists, preparing a report to the UN Human Rights Council prior to Azerbaijan’s universal periodic review, and publishing an op-ed in the Houston Chronicle.

In July 2015, 16 U.S. Senators sent a letter to the President of Azerbaijan requesting Mammadli’s release.