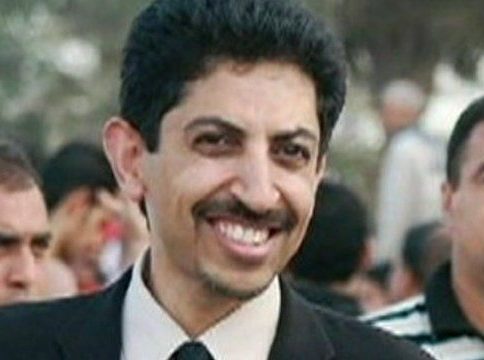 Abdulhadi al-Khawaja is a prominent human rights defender convicted and sentenced to life in prison on June 22, 2011, for financing and participating in terrorism to overthrow the government, as well as spying for a foreign country. He is the founder and president of the Bahrain Center for Human Rights.

Al-Khawaja has been a well-known human rights defender for more than twenty years. Until February 2011, al-Khawaja worked as a regional coordinator for the international organization Front Line Defenders. Because of his tireless advocacy for peaceful reform in Bahrain, al-Khawaja has faced a long history of arrests and assaults.

Just before his current detention, al-Khawaja had publicly criticized the regime’s brutal response to the anti-government protests in Bahrain. He demanded that charges of torture and corruption be brought against members of the royal family.

Early on April 9, 2011, fifteen masked men stormed into al-Khawaja’s daughter’s apartment, breaking down the door with a sledgehammer. The masked men did not produce identification or an arrest warrant. The men beat al-Khawaja until he lost consciousness and dragged him down the stairs by his neck. He was taken into custody along with his two sons-in-law. Authorities held him incommunicado for some weeks, in which time they tortured him physically and mentally.

On May 8, 2011, al-Khawaja’s trial began before the National Safety Court –a military tribunal. He was prosecuted along with a diverse set of twenty other individuals. As the trial progressed, it was clear that the government did not respect al-Khawaja’s internationally-protected rights to a fair trial. Despite the lack of evidence against him, al-Khawaja was charged and convicted with financing and participating in terrorism to overthrow the government, as well as spying for a foreign country. On June 22, 2011, he was sentenced to life imprisonment.

Al-Khawaja has been subjected to deplorable treatment during his detention. Because of the beatings, he endured from security agents, he suffered four fractures to his face, requiring a four-hour surgery to repair his jaw. Security forces are also subjecting al-Khawaja to other forms of inhumane treatment, such as attempted sexual assault and psychological torture. After his conviction and sentencing, al-Khawaja told the court that the Bahraini people would continue their opposition to the country’s authoritarian regime. For his defiance, al-Khawaja was beaten by court officers and dragged from the room.

The Danish government has called on the Bahraini government to extradite al-Khawaja to Denmark, as he also holds Danish citizenship; however, their request was denied by the Supreme Judicial Council on April 8, 2012.

On April 2, 2012, the Bahraini Court of Cassation began to review the verdicts of al-Khawaja and thirteen other defendants charged in relation to the 2011 anti-government protests. Al-Khawaja’s lawyer requested that he be released on bail pending the court’s decision; however, the request was denied.

On April 30, 2012, the Court of Cassation ordered a retrial in civilian court and refused to release al-Khawaja on bail pending the trial. On May 22, 2012, al-Khawaja appeared at his first court hearing in a wheelchair. According to witnesses he appeared frail but spoke about the abuses and torture he has suffered while in detention. On September 4, 2012, a Bahraini appeals court upheld his sentence of life in prison.

Freedom Now has raised the case with the King of Bahrain, highlighted it before the UN Human Rights Council before Bahrain’s universal period review, and authored an op-ed that was published on CNN.

In April 2012, four members of the U.S. Senate called for al-Khawaja’s release. In February 2013, a member of the European Parliament nominated al-Khawaja and his family for the Nobel Peace Prize.