Afghanistan: Dispatch from the Taliban’s War on Women 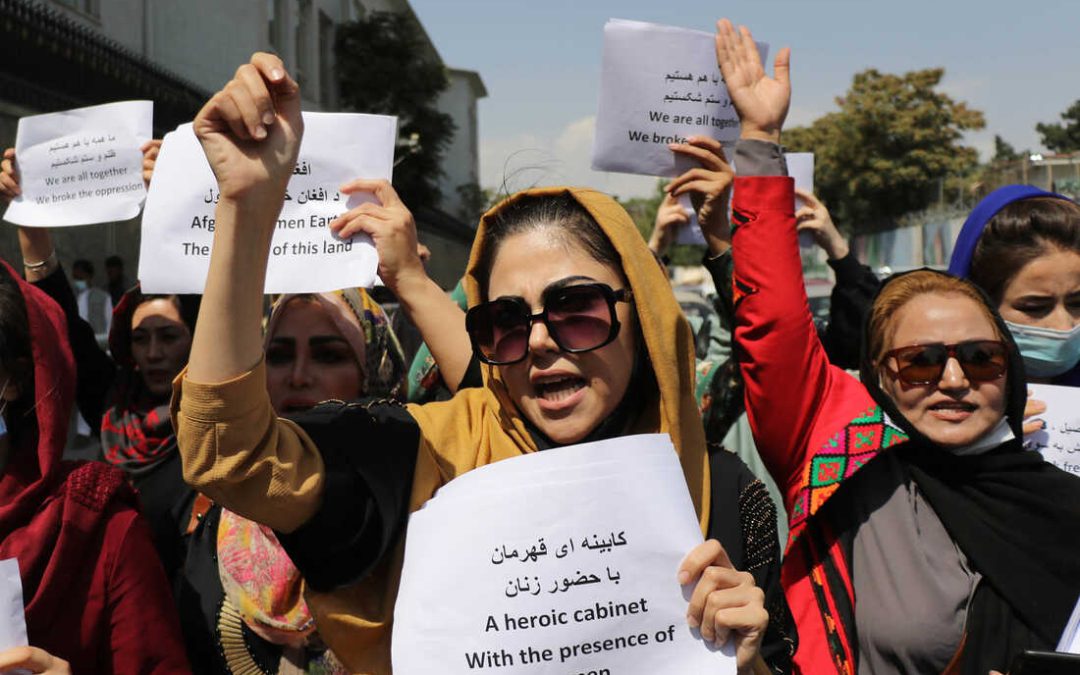 The Taliban’s conquest of Afghanistan has been a chaotic affair, yet a year later one constant remains – intolerance for women’s rights. Afghan women have repeatedly faced resistance from the Taliban as they organized peaceful protests to reclaim their rights to education, employment, and free movement. Their homes have been raided, they have been detained, tortured, and forced to pledge they would cease these protests.

Most recently, on August 13, 2022, two days before the anniversary of the fall of Kabul, 60 women staged a protest in Kabul demanding “Food, Work, and Freedom.” The Taliban responded with physical and verbal abuse before dispersing the protest by using whips and stun guns as well as discharging their firearms.

Freedom Now spoke with three woman protesters at the August 13 protest and reviewed videos and photos provided by the activists. The following is an account of these events based on this information.

Zholia Parsi was live on Facebook when the protest started. She told Freedom Now:  “As soon as we arrived at the scene of the protest around 20 Taliban members surrounded us and started shooting their firearms in the air to disperse us. We were not scared so we continued chanting our slogan: ‘Food, Work, Freedom.’ At that point they started shooting on the ground close to us. Women started running. That is when they chased us, pushed some of us to the ground and whipped and used electric devices to shock us.”

Protestors were detained inside a print shop for three hours during which they were exposed to verbal and physical violence. The Taliban struck some women on their genitals and breasts, yelling: “How are you going to show this to the world? You can’t!” The women had their phones confiscated during this time and the data erased. One woman reported that the Taliban never returned her phone, claiming they needed it to conduct a further investigation.

Asma, one of the women held in detention, reported: “A Taliban member pointed his gun at me and said if I kill you right now it will count as Jihad. You take orders from infidels. It is because of you whores that the world does not recognize our government and are holding our money. If I shoot you in your head right now no one will hear about it.”

According to eyewitnesses, Hazara women were treated even more harshly. Zarifa Yaqobi a Hazara protester told Freedom Now that there were three Hazara women among those detained by the Taliban and they were called names and threatened at gun point.  Zarifa reports: “When I confronted one of the Taliban members and asked him why they were being harsh to women he said: Shut up you dirty Hazara! Hazara women are prostitutes and Hazaras has no place in Afghanistan. I could kill every single one of you.” According to Zarifa the three Hazara women were the last ones to be freed from detention.

Twenty-nine women sustained injuries during the protest. Women reported different kinds of injuries from broken bones to vaginal bleeding, severe pain, head trauma, and wounds that required stitches. Protesters were hesitant to go to public hospitals for treatment for fear of being arrested by the authorities. Alternatively, they were unable to use private health facilities given they cannot afford the high costs as many women lost their jobs when the Taliban returned to power.

Munisa Mubarez, one of the protest leaders, told Freedom Now: “I reached out to some foreign diplomats and asked them to meet with a group of  the women who were injured and extend support to them. They refused to offer immediate help and implied that had the women obtained a permit for their protest this would not have happened.  While this is not true. In January when we staged a protest and had a permit Taliban attacked us and pepper sprayed woman protesters anyway. They don’t care about permits. If anything, we are at risk of getting detained if we go to them before the protest to get a permit. We have to find a way to raise our voices.”

Most of the women who protested on August 13 are currently in hiding and scared for their lives. One woman Freedom Now spoke with has not been able to return to her own house since the protest and has to change her location regularly.

There is no indication this type of treatment will end in the immediate future. Over the past year, the Taliban has issued 34 decrees with the aim to control every aspect of the lives of Afghan women. These decrees have greatly limited the rights of women to education, employment, free movement and even access to basic services such as health. Despite promises to reopen schools to women, it has been 344 days since the ban on girls’ access to secondary and high schools. While women are allowed to attend universities, strict hijab is imposed. As evidenced by the August 13 events, when women speak up against this oppression they are met with violence and intimidation.