Report: Legal Persecution: Vietnam’s Use of Law as a Weapon Against Civil Society 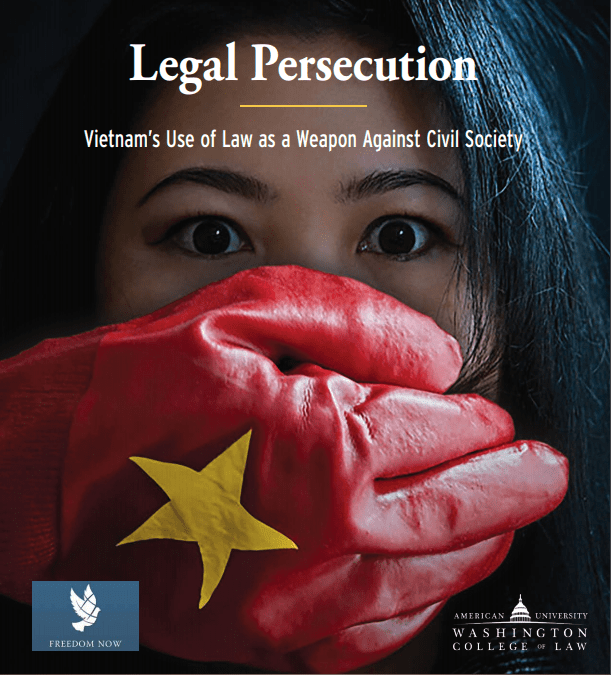 A new report by Freedom Now and American University’s Washington College of Law paints an alarming picture of the state of human rights in Vietnam and illustrates a trend of de jureand de facto repression which appears to be worsening.

The report, Legal Persecution: Vietnam’s Use of Law as a Weapon Against Civil Society, charts the rapid acceleration of Vietnam’s crackdown on civil society as the government passes new laws and amendments to enable its repression. These laws attempt to legitimize practices that violate Vietnam’s obligations to safeguard freedom of expression, association, assembly, and religious practice under international law. These laws have also contributed to the common practice of detaining individuals perceived to be working against the government’s interest; it is estimated that currently over 150 prisoners of conscience populate Vietnam’s jail cells.

“By strengthening and creating new laws that violate its international legal obligations, Vietnam has turned its legal system into a tool of persecution instead of justice. The country uses this legal framework to silence human rights defenders, journalists, bloggers, and religious minorities through abuse and wrongful criminal detention,” said Freedom Now Legal Director Kate Barth.

In January 2018, an amended Criminal Code came into effect which included harsher penalties and more expansive provisions for the crimes with which government critics are most commonly charged. The government has also enacted a number of new laws and ordinances, ostensibly in the interest of national security or press freedom, but that actually serve to restrict freedom of expression. Online and media expression have been particularly targeted. A new cybersecurity law set to come into effect in 2019 will require online businesses to store their data inside Vietnam and turn over user data to certain government ministries; other provisions serve to criminalize online expression that counters government narratives. Religious freedom has also been under assault, particularly with the new Law on Belief and Religion which expands government control over religious groups and imposes harsh penalties on those attempting to maintain independence.

The report documents interviews with 25 Vietnamese refugees whose stories revealed an environment of harsh repression and disrespect for basic human rights–even before the latest round of legal restrictions. The refugees provided numerous firsthand accounts of harassment, intimidation, arrest, detention, and conviction on account of such person’s deemed opposition to government interests or membership in a minority religious group.

In addition to laws which attack substantive rights, the report highlights how individuals’ due process rights are often at risk during legal processes; the use of torture and ill-treatment during interrogation and detention remains widespread and detainees are often subjected to cruel and inhuman treatment and held in prisons with poor sanitation, bad food, and limited access to medical care. In practice, improper arrest procedures, prolonged pre-trial detention and unfair trials plague Vietnam’s criminal justice system—sometimes, even in contravention to Vietnamese law’s own due process protections.

Freedom Now and American University’s Washington College of Law call on the government of Vietnam to: