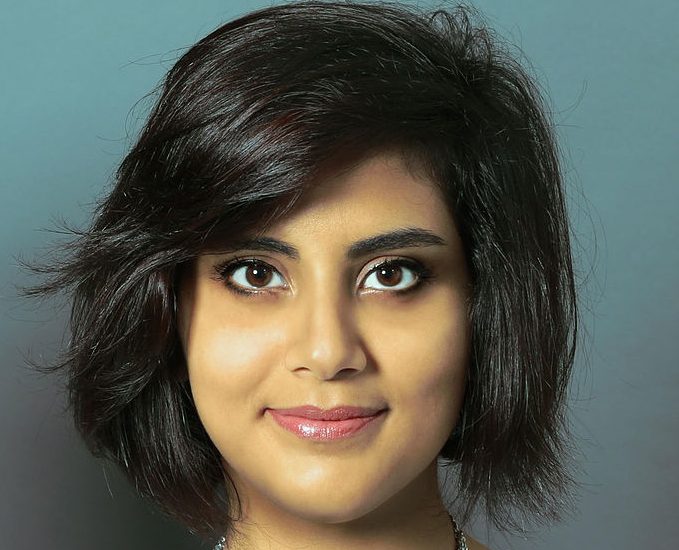 Loujain Alhathloul is a prominent women’s rights activist wrongfully imprisoned in Saudi Arabia. She was detained on charges related to her activism.

Alhathloul is one of the leaders of the Saudi women’s rights movement to end the systemic marginalization and abuse of women in Saudi Arabia. As part of the “Together We Stand to End Male Guardianship” and “Women Demand the Overthrow of Guardianship” campaigns, Alhathloul advocated against Saudi Arabia’s ban on female drivers, the Saudi male guardianship system, and domestic violence. She has advanced her cause by raising awareness online, supporting international human rights monitors, and conducting peaceful protests by driving despite the ban.

The Saudi government has repeatedly targeted Alhathloul for her activism. She was arrested in December 2014 for attempting to drive across the border from the United Arab Emirates to Saudi Arabia and again in June 2017 on unspecified charges. In March 2018, she was forcibly removed from the United Arab Emirates, where she had been living, and brought back to Saudi Arabia where she was detained for several days.

On the evening of May 15, 2018, armed state security officers raided her home and arrested her without a warrant. Over the next three days, the Saudi government arrested more than a dozen women’s rights activists. Ironically, the crackdown coincided with the government’s decision to lift the driving ban on women, a decision welcomed by many of the activists. The government initiated a misinformation and propaganda campaign immediately after the arrest of Alhathloul and her fellow activists. Local newspapers referred to the women as “traitors”; pro-government Twitter accounts used similar language.

After her arrest, Alhathloul was kept incommunicado for 35 days. During her detention, she was tortured by Saudi officials, who whipped, beat, electrocuted, and sexually harassed her. Alhathloul’s parents have stated that her “thighs were blackened by bruises” when they were finally allowed to visit her in December 2018, and that she “was shaking uncontrollably, unable to hold her grip, to walk or sit normally.” Both Alhathloul and her parents submitted formal complaints to the government regarding this treatment. To date, these complaints have gone unanswered. In August 2019, Saudi State Security officials offered to release Alhathloul if she recorded a video denying that she had been tortured. She refused this offer.

On March 13, 2019, an official indictment against Alhathloul was issued and her trial began. The full indictment, which has not been made public, included 12 separate charges related to Alhathloul’s activism. The vast majority of the charges make no reference to any provision of Saudi law and instead single out activities, such as applying for a job with the United Nations, that are protected under international human rights law.

In April 2019, Alhathloul’ trial was postponed to February 2020, a period during which she was held in solitary confinement. In March 2020, the last scheduled hearing was canceled and postponed to an indefinite date. There was no trial session or notification from the courts on the trial process between March and November 2020. Family visits were forbidden between March and August 2020, ostensibly due to COVID-19 Alhathloul was also prohibited from making phone calls, while other prisoners have been allowed to exercise this privilege.

After four months of incommunicado detention, Alhathloul was finally allowed to family visits in August 2020. During that visit Alhathloul disclosed she staged a six-day hunger strike to compel the authorities to re-instate communication with her family. However, authorities again denied Alhathloul access to her family between September 9 and October 26. Alhathloul announced on that date she would begin a second hunger strike. The strike lasted for two weeks.

On November 25, 2020, Alhathloul’s trial resumed. After a brief hearing, her case was transferred to the Specialized Criminal Court, which has jurisdiction over terrorism cases.

On December 28, the Specialized Criminal Court, convicted Alhathloul of numerous charges related to her human rights activism. The court delivered a suspended sentence of 2 years and 10 months.

Alhathloul was released from prison on February 10, 2021. However, she is subject to three years of probation and a five-year travel ban.

Freedom Now filed a petition with the UN Working Group on Arbitrary Detention on behalf of Alhathloul in September 2019. The Working Group issued an opinion in June 2020 finding that Alhathloul’s imprisonment was a violation of international law and calling for her immediate release.

In January 2020, eight members of the U.S. House of Representatives nominated Alhathloul for the Nobel Peace Prize.