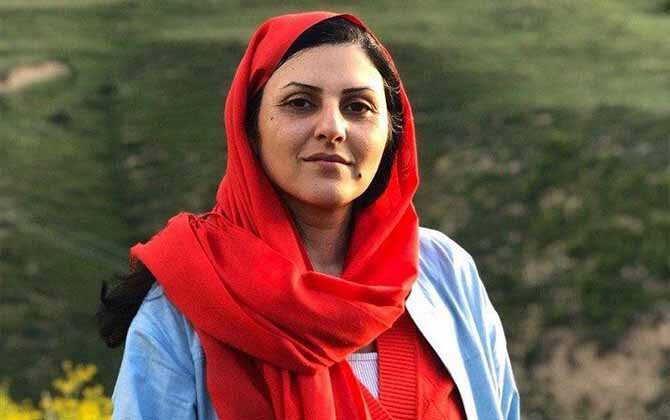 Golrokh Ebrahimi Iraee is a writer and political activist initially sentenced to a six year prison sentence for charges related to an unpublished story she wrote criticizing the practice of stoning in Iran.

Iraee was arrested on September 6, 2014 with her husband Arash Sadeghi, an activist who has been arrested and imprisoned no less than four times since December 2009, and two friends at her husband’s workplace, a stationery store in Tehran. The exact circumstances and justification for her initial arrest are undisclosed. The authorities did not present an arrest warrant or any form of identification.

After this arrest, authorities violently ransacked the couple’s home without a search warrant. The authorities confiscated personal possessions such as laptops, CDs, and papers. Among the papers was a notebook that Iraee used as a personal diary. It contained a fictional handwritten story in which a female character watches The Stoning of Soraya M, a 2008 Persian-language film depicting the true story of a woman stoned to death for adultery. The character is upset by Soraya’s fate and burns the Qur’an in an emotionally charged moment.

Iraee was interrogated about the contents of the diary and the story. During her initial interrogation, she was repeatedly pressured to confess under threat of execution. She was questioned in a room adjoining the location where her husband was detained and could hear him being tortured through the walls. Iraee was placed in solitary confinement for three days and endured twenty days without access to a family, lawyer, or court proceeding.

Branch 15 of the Revolutionary Court convened Iraee’s trial in May 2015. She was charged with “insulting Islamic sanctities” for the diary entry and “spreading propaganda against the system” for two separate Facebook posts as well as possession of alleged propaganda in her home. The trial was rife with procedural violations. For example, because the trial focused on the activities of Sadeghi, Iraee was barred from defending herself. Additionally, Iraee’s first lawyer was pressured to withdraw and her second lawyer was barred from representing her.

Despite these violations, Iraee was convicted in absentia and sentenced to six years in prison, the maximum allowable prison term for each charge; this charge was later reduced to two and one half years in prison as part of a Nowrooz (Persian New Year) pardon. Sadeghi was sentenced to 15 years in prison on charges of “spreading propaganda against the system” for interviews he conducted about human rights and prison conditions; “spreading lies in cyberspace” for Facebook posts about political prisoners and 1980s Iranian history; and “insulting the founder of the Islamic Republic” for the same Facebook posts.

After her conviction, Iraee was released from detention and allowed to return home. She never received a formal summons to begin serving her sentence. However, on October 24, 2016 she was arrested by intelligence officials who escorted her to prison.

In October 2016, Sadeghi began a widely publicized 71 day hunger strike to pressure authorities to release his wife. In response to the strike, authorities granted Iraee leave on January 3, 2017 in exchange for a bail payment. Yet, the release was short-lived. She was re-arrested on January 22, 2017 on her way to visit Sadeghi in the hospital.

Iraee continues to speak out publicly to protest the Iranian government from her jail cell. She has written several open letters from prison, including one in which she has refused to participate in the May 2017 presidential election, criticized a staged tour of Evin prison for foreign ambassadors in July 2017, and supported protesters.

In January 2018, Iraee faced additional charges for allegedly insulting Supreme Leader Ali Khamenei and reciting a political poem. She was subsequently beaten by prison guards and transferred to Shahr-e-Rey Prison after she refused to go to court. In early February 2018, Iraee began a hunger strike which seriously impacted her health; in early April 2018 she was transferred to the hospital in critical condition. In May 2018, she was returned to Evin Prison.

On April 17, 2018, Freedom Now and Dechert LLP filed a petition with the UN Working Group on Arbitrary Detention on behalf of Iraee. In August 2019, the Working Group delivered an opinion finding Iran to be in violation of international law.

On April 8, 2019, Iraee was released from prison after posting bail. Despite her release, she was charged with additional crimes for her activism in prison and re-arrested in November 2019 to serve a two-year prison sentence