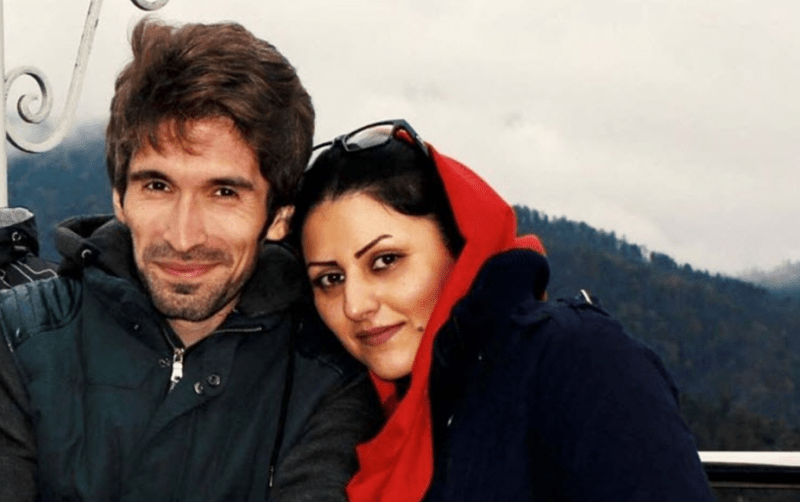 It is called Día del Cariño in Guatemala, Araw ng mga Puso in the Philippines, and Ystävänpäivä in Finland. Originally a Western Christian feast day, Valentine’s Day has evolved into a celebration of loved ones in many countries throughout the world.

In Iran, however, Valentine’s Day is not officially recognized. Since 2011, authorities have prohibited any advertisement or sale of goods with the name Valentine’s Day or its symbols. And yet such a declaration has not stopped young Iranians from gathering in public places to exchange chocolate boxes with heart signs or teddy bears.

Although they are both in Tehran, Golrokh Ebrahimi Iraee and Arash Sadeghi will not be exchanging gifts today. The married couple has spent the last five Valentine’s Days apart, separated by 30 miles and prison bars.

In September 2014, Iranian authorities arrested Golrokh and Arash at the stationary store where Arash worked. Upon their arrest, authorities violently ransacked the couple’s home. This invasion of privacy resulted in the capture of numerous personal items, including Golrokh’s own diary. Within the pages was fictional story written by Golrokh in which a female character watches The Stoning of Soraya M, a 2008 Persian-language film depicting the true story of a woman stoned to death in Iran for allegedly committing adultery. The character is upset by Soraya’s fate and burns the Qur’an in an emotionally charged moment. Golrokh was interrogated about the contents of her diary and the story. Arash was kept in the room next to her and she could hear him being tortured through the walls.

The couple’s trial began in May 2015. They were both charged with “spreading propaganda against the system.” Golrokh faced the additional charge of “insulting Islamic sanctities” for the diary entry. Arash was also charged with “spreading lies in cyberspace” for Facebook posts about political prisoners and 1980s Iranian history; and “insulting the founder of the Islamic Republic” for the same Facebook posts. Golrokh was sentenced to six years in prison and Arash received a 15 year sentence.

Golrokh was released after her conviction. It was not until October 2016 that she was ordered to begin serving her sentence. Upon her detention, Arash began a 71 day hunger strike, demanding his wife be released. The authorities finally gave into pressure and released Golrokh on January 3, 2017. Yet, the release was short-lived. She was re-arrested on January 22 on her way to visit Arash in the hospital.

Golrokh continued to protest the Iranian government from her jail cell. She has written several open letters from prison, including one in which she has refused to participate in the May 2017 presidential election, criticized a staged tour of Evin prison for foreign ambassadors in July 2017, and supported protestors. In January 2018, Golrokh faced additional charges for allegedly insulting Supreme Leader Ali Khamenei and reciting a political poem. She was subsequently beaten by prison guards and transferred to Shahr-e-Rey Prison after she refused to go to court. In early February 2018, she began an 81 day hunger strike which seriously impacted her health. In May 2018, she was returned to Evin Prison. In April 2018, Freedom Now and Dechert LLP filed a petition with the UN Working Group on Arbitrary Detention on behalf of Golrokh, a decision is pending.

Meanwhile, Arash’s health has deteriorated rapidly. After suffering from arm pain for 18 months, he was finally diagnosed with a rare form of bone cancer in June 2018. He has not received specialized treatment since September 2018 and as of this week he remains in a prison hospital suffering from an infection that has immobilized his arm. He may very well pass away without ever seeing Golrokh again.

Golrokh and Arash should not spend another moment apart. Given their health conditions, Iran should immediately and unconditionally release the couple on humanitarian grounds and allow them to spend the time they have left together.