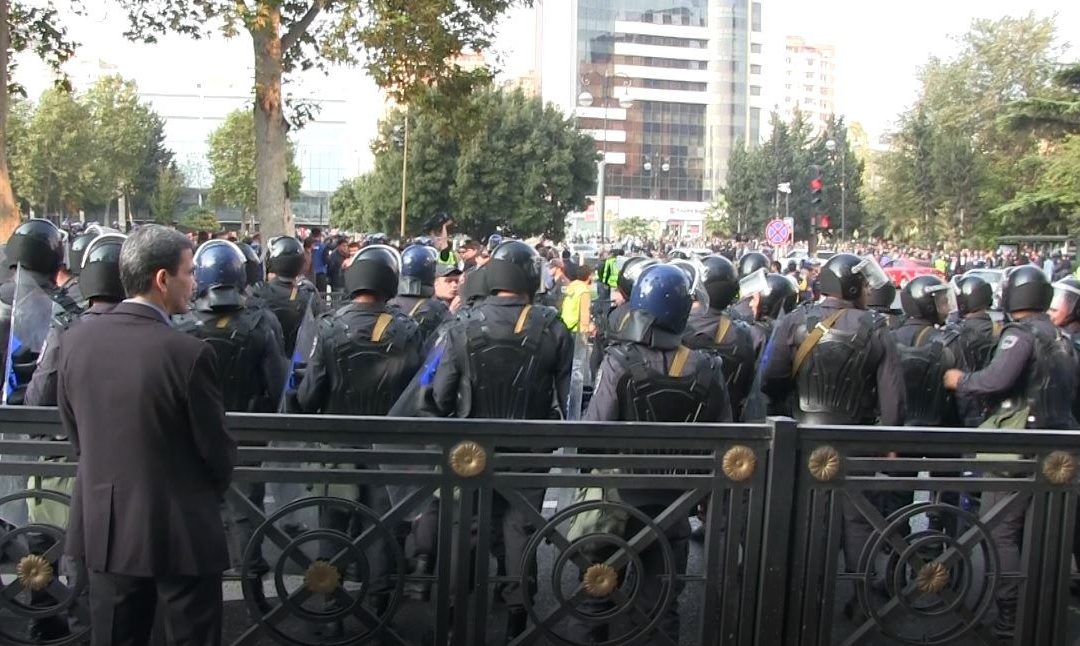 Civic Solidarity Platform condemns violations of freedom of assembly and the right not to be subjected to torture and ill treatment in rallies held in Baku, Azerbaijan on 19 and 20 October 2019

On 19 October, the National Council of Democratic Forces held a protest in the center of Baku calling for political and social reform, and on 20 October, women’s rights activists marched to protest the killing of women by domestic violence.

While a system of prior authorization of public events can assist in their smooth conduct, its enforcement cannot become an end in itself. Where non-authorized demonstrators do not engage in acts of violence, the public authorities have to tolerate people gathering and marching. However, NGO monitoring and media reports show that authorities dispersed the above mentioned demonstrations shortly after they began using excessive and disproportionate force against protesters, despite the fact that they had been intended to be peaceful and had been conducted in a peaceful manner. As a result of the ill treatment, some organizers and participants were injured. Similar situations in Azerbaijan already had led the ECtHR to conclusions on violations of freedom of assembly (see e.g. Gafgaz Mammadov v. Azerbaijan, no. 60259/11, 15 October 2015).

Before and during the rally on 19 October, dozens of organizers and participants were sentenced to between 5 and 60 days of administrative detention on misdemeanor charges of resisting police orders. Subway stations were closed for hours, and internet connection has been weakened or completely disrupted in some places. The measures taken by the authorities are cause for serious concern about the protection of freedom of assembly and citizens’ right to access information.

The members of the Civic Solidarity Platform conclude that the incidents and the government’s cruel treatment of peaceful protesters imply an unacceptable restriction on freedom of assembly. The use of excessive and disproportionate force by police against protesters is a violation of the right not to be subjected to torture and cruel and inhumane treatment. These actions are a gross violation of Azerbaijan’s obligations under international law and its commitments to the Council of Europe, OSCE, and the UN.

The members of the Civic Solidarity Platform call for the release of all persons sentenced for engaging in peaceful protest; an objective and comprehensive investigation into cases of torture and ill-treatment; and for legal action against the perpetrators of torture and ill-treatment and those who ordered it. We call for an end to the interference of the peoples’ right to exercise the right to freedom of peaceful assembly and for the government of Azerbaijan to undertake fundamental reforms in these areas in order to guarantee its adherence to international human rights obligations.

Signed by the following CSP members:

Kazakhstan International Bureau for Human Rights and the Rule of Law

Center for the Development of Democracy and Human Rights, Russia

Center for Participation and Development, Georgia